Density: The amount of features or events per unit area

Density estimation: The construction of the density function from the observed data

Kernel: A window function fitted on each observation (weighted or unweighted) to determine the fraction of the observation used for density estimation at any location within the window

2. Why Do We Need Kernel Density?

Density calculates the amount of features or events per unit area. It is an important measure of the distribution pattern of features or events. For example, population density can be used to identify where people cluster in a region. Zone-based density is the simplest and most widely- used density measure in the context of GIS&T, which applies some form of zoning, such as a regular grid or a census, to a region. For each zone, the density is then calculated by dividing the total amount of the features or events within the zone by the size of the associated zone.

Zone-based density is easy to understand and to calculate. However, it has several limitations. First, the delineation of the zones determines the zonal size and how the features or events are aggregated over the zones. Therefore, for the same set of observed data, the densities could vary substantially depending on the delineation of the zones used, which leads to a difficulty in the interpretation of the distribution pattern. This is a manifestation of the well-known modifiable areal unit problem (Openshaw & Taylor, 1981) in spatial analysis. Secondly, each zone has a constant density and the local variation within the zone is obscured. Thirdly, a zone-based density surface generally is not continuous as density may change abruptly at the zone boundaries.

As an alternative to zone-based density, kernel density can solve or mitigate the above issues by constructing a continuous density surface from the observed data. Kernel density estimation has been widely used for various purposes, such as point or line data smoothing, risk mapping, and hot spot detection. In public health and health geography, kernel density has been used to measure spatial accessibility to health services (Yang, Goerge, & Mullner, 2006), estimate disease incidence rates and identify hot spot areas for intervention targeting (Rushton et al. 2004), and investigate the relationships between environmental exposures and health outcomes (Kloog, Haim, & Portnov, 2009; Portnov, Dubnov, & Barchana, 2009).  In archeology, kernel density has been used to derive historical land-use surfaces based on archeological sites (Bonnier, Finné, & Weiberg, 2019), to estimate the densities of geomorphological and geological hazards for understanding the positioning constraints of historical buildings (Mariani et al., 2019), and as a classification tool to group specimens based on the analytical results of the chemical composition (Santos et al., 2006).

at location x from a set of weighted observation points X1 ,,, Xn . Each wi represents the weight of Xi, such as the number of crimes or the total population at that location. K is the kernel function that determines the fraction of the weight of Xi at location x based on the distance di between the two points (i.e., x - Xi). Eq.1 can be also applied to unweighted observation points by setting w1 , ... , wn with the value of one. 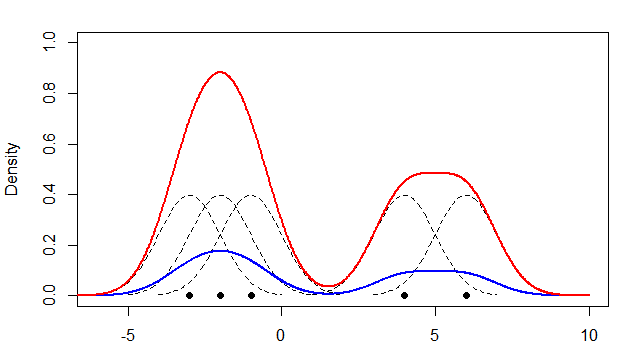 Spatial analysis usually deals with two-dimensional space. For two-dimensional (x, y) point data (weighted or unweighted), such as crimes or disease cases plotted on a planar map, the kernel density estimation procedure is almost the same as univariate density estimation except that a second dimension needs to be added to the kernel.  When a symmetric kernel is used, the procedure essentially can be thought as rotating the kernel on each point around its central axis and then scaling the resulting kernel window to make the total volume under the kernel surface equal to one.

Theoretically, kernel density can be estimated at any location. However, it is impossible for a computer to calculate the density estimate for every point in the space because the number of points is infinite. A common way is to overlay a grid on top of the space and calculate the density estimate for the center point of each grid cell. A smaller cell size usually leads to a more detailed density surface, but also makes the computation more intense. As an example, the kernel density estimate of burglary incidents in Washington DC in 2018 is calculated with two different output cell sizes: 100m and 500m. The burglary incidents data is downloaded from the website of Open Data DC and the DC boundary data comes from the US Census.  The calculation was conducted with the kernel density tool in Esri’s ArcGIS for Desktop v10.6. All default values are taken for the parameters of the tool except for the output cell size. Fig.2(a) shows the original 1415 burglary incident locations. It should be noted that, for the purpose of confidentiality protection, these locations are the associated street block centers instead of the real crime locations. Fig.2 (b) and (c) show the kernel density estimation outcomes using two different output cell sizes. Obviously, the density surface with the output cell size of 100m (Fig.2 (c)) is much more smoothed and detailed than that with the output cell size of 500m (Fig.2 (b)). With the kernel density maps shown in Fig.2, we can see that the crimes were mainly concentrated in the center and southeast of Washington DC. This finding can assist the planning of crime prevention and control activities.

3.1 Kernel Examples and Its Selection

Since most of the commonly-used standard kernels are bounded within one distance unit, to accommodate the data, they are usually scaled so that the observation point can be spread farther or closer.  A scaled kernel Kh(d) can be defined as

where K is the standard kernel to scale and h is called bandwidth or smoothing parameter that controls the extent of the kernel scaling. It can be proved that the integral of Kh also equals to 1. The larger the bandwidth is, the farther the observation point spreads. More detail about bandwidth selection can be found in Section 3.2.

In the context of statistics, the observation points are assumed as a sample from an unknown probability density function. Density estimation is to construct an estimate of the density function from the observed data. It has been proved that, among all non-negative kernels with their own optimal bandwidth used, the Epanechnikov (paraboloid/quadratic) kernel is optimum in the sense of minimizing the discrepancy of the density estimator from the true density function. However, other commonly-used kernels, such as those listed in Table 1, can achieve very similar results (Silverman, 1986). Therefore, it is appropriate to base the choice of kernel on other considerations, such as the user’s analytical experience, domain knowledge of the applications, and computational considerations. S. C. Smith and Bruce (2008) provides their reasoning on the choice of kernel for different types of crime. For example, they suggest the uniform kernel or other moderately dispersed kernels for residential burglaries because most burglars cruise neighborhoods looking for likely targets and a housebreak in any part of a neighborhood transfers risk to the rest of the neighborhood. Compared to residential burglaries, domestic violence incidents at one location are usually not contagious in the surrounding area, so a kernel that weights more heavily to the central point is suggested, such as negative exponential kernel.

A natural method is to subjectively choose the bandwidth based on prior ideas about the true density. First, multiple density estimates with different bandwidths are plotted out. Chosen from these estimates, the optimal bandwidth is the one that leads to the estimate most in accordance with one’s prior ideas about the true density. If the true density is totally unknown, which is the most common case, exploring multiple bandwidths may provide users some insight of the underlying data structure, which is useful for the purposes of model and hypothesis generation.

are the number and variance of the observations, respectively. The kernel density tool in Esri’s ArcGIS (v10.2.1 or later) also uses the rule-of-thumb method with a quartic kernel to calculate the default bandwidth (search radius) for two-dimensional density estimation (Esri, 2019).

In addition to the subjective choice and rule-of-thumb method, there are several more sophisticated methods for optimal bandwidth estimation, such as cross-validation methods, plug-in methods, etc. More technical detail of these methods have been discussed by Silverman (1986) and Turlach (1993).

When a fixed bandwidth is applied across the entire set of observations, it is possible that, in regions of low density, the kernel can only covers very few observations, while regions of high density will see a large amount of observations in the kernel. As a result, when a small fixed bandwidth is applied to data from long-tailed distributions, there is a tendency for spurious noise to appear in the tails of the estimates. If the estimates are smoothed sufficiently with a larger fixed bandwidth, then some essential detail in the main part of the distribution may be masked.  To solve this issue, adaptive or variable bandwidth approaches, which vary the kernel bandwidth from one point to another, have been suggested.

4. Kernel Density for Lines and Networks

In the real world, many events happen on or alongside a network, such as car crashes on streets. Okabe, Satoh, and Sugihara (2009) have shown that the planar kernel density estimation methods discussed above are inappropriate to estimate the density of network points. To solve this issue, they proposed three types of kernel functions for network points and two of them are unbiased kernel density estimators when the true probability density is a uniform distribution. These network-based methods have been implemented in the SANET software.

Kloog, I., Haim, A., & Portnov, B. A. (2009). Using kernel density function as an urban analysis tool: Investigating the association between nightlight exposure and the incidence of breast cancer in Haifa, Israel. Computers, Environment and Urban Systems, 33(1), 55-63.

Turlach, B. A. (1993). Bandwidth selection in kernel density estimation: A review. Paper presented at the CORE and Institut de Statistique.