CMYK: a color space describes the intensities of Cyan, Magenta, Yellow and blacK, in a subtractive system, using in practice a fourth dimension, the black pigment.

color: the visual human perception of the spectral power distribution of a light source, that may be defined by its physical characteristics.

color value: light or dark variations of a single hue.

color saturation: the intensity of a single hue.

color contrast: the difference in the color and brightness (lightness) of an object and other objects in the field of view.

color palette: the set of all of the colors that are used in a project, and their relationships.

color scheme: a logical combination of colors, as a general plan for which colors to use.

color space: a specific organization of colors, where each color may be characterized by a point in a tri-dimensional (in general) space.

color visual deficiencies (differences) (CVD): the inability to distinguish some shades of colors.

gamut: the subset of colors, which can be represented within a given color space or by a specific device.

harmony: a satisfying balance between colors that make sense together.

HSV: a color space describing a color by its Hue, Saturation and Value.

monochrome: an image in one color hue, potentially varying in value and saturation.

perceptually uniform: a change of the same amount in a color value resulting in a change of about the same visual importance.

RGB: a color space describing the intensities of Red, Green and Blue.

sequential schemes: a logical arrangement of colors from low to high, represented by sequential lightness steps.

diverging schemes: a logical arrangement of colors that pairs two sequential schemes based on two different hues diverging from a shared light color (the critical midpoint), toward dark colors of different hues at each extreme.

2. The Perception of Color

Color is the visual human perception of the spectral power distribution of an energy source. Color may be defined by the wavelength of the light that is reflected from related objects. The range of wavelengths humans can perceive, or the visible spectrum, is approximately of 380-750 nm: it includes all colors forming the well-known rainbow described by Newton in 1671 with the help of splitting the white light with a prism. Those pure spectral colors form a continuous spectrum and are approximately divided into: violet (380-450 nm), blue (450-495 nm), green (495-570 nm), yellow (570-590 nm), orange (590-620 nm), and red (620-750 nm) (from left to right on Figure 1).

Color perception comes from the varying sensitivity of different cells in the retina, the neuronal layer of the eye, to light of different wavelengths (Figure 2a). The light arriving at the eye from a given direction determines the color sensation in that direction. There are two types of photoreceptors in the human retina: rods and cones, varying in absorbances (Figure 3). Rods are responsible for vision at low light levels (black, white, gray, and night vision). Cones are active at higher light levels to see color and fine detail. The central fovea of the eye is rod-free and has a very high density of cones. When light energy strikes rods and cones, neural signals are created as a result of chemical and routed through bipolar and ganglion cells forming the optic nerve (Figure 2b). This nerve then transmits information to the brain’s visual cortex (Ramamurthy et al. 2015).

Color vision and perception is a complex process that involves the eyes and brain. The trichromatic theory of color vision explains one part of this process, focusing on the photoreceptors in the eye that then send signals to the brain. Each type of cone is sensitive to approximately 200 color variations, thus human can distinguish about 10 million different colors (Wyszecki, 2006), although most people see less in practice. In trichromatic color vision theory, normal human vision is trichromatic, meaning three different types of cones in the retina are responsive to the colors blue (420nm - 440nm wavelengths), green (530nm - 540nm wavelengths), and red (560nm - 580nm wavelengths), respectively. The cones generate sets of responses of identical shape regardless of the wavelength that excite them (see the blue, green and red curves in Figure 3). The brain then interprets the color by comparing the inputs from each type of cone. The opponent process theory, in contrast, focuses on how color vision operates at the neural level and how the cones connect to the ganglion cells. The opponent process theory suggests that color perception is controlled by the activity of two opponent mechanisms, blue-yellow and red-green, opposing each other in excitatory and inhibitory responses, controlled by opponent neurons. Therefore, only one color can been seen at the time, because both colors oppose one another: for instance, red creates an excitatory response when green creates a negative one, and thus greenish-red cannot be seen because the opponent neurons only can detect one of these colors at the time. At the neural level, the opposing elements inhibit each other to determine how color is perceived. Both theories of color vision are needed to explain the complexity of color vision perception. 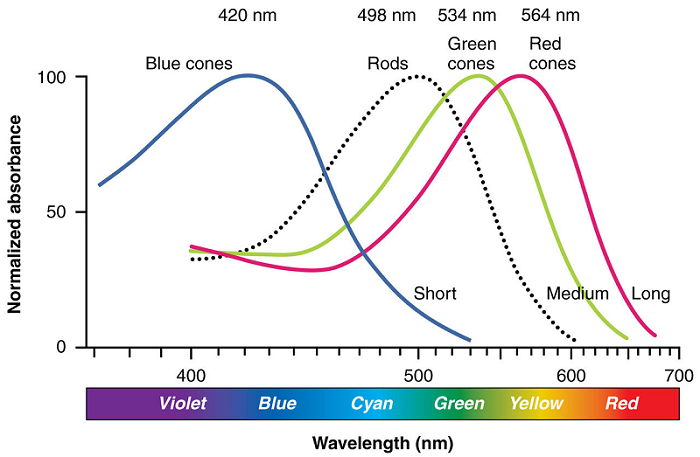 Color is divided into three separate visual variables: 1) color hue, the dominant wavelength in the visible spectrum; 2) color value, the overall amount of light emitted or reflected; 3) and color saturation, the breadth of the signal across the visible spectrum (see Symbolization & the Visual Variables).

Color vision deficiencies (differences) (CVD) is the inability to distinguish some shades of colors (Figure 4). One of the cone cells could be missing or damaged: the absence/alteration of red cone pigments (protanopia/protanomaly) or the absence/alteration of green cone pigments (deuteranopia/deuteranomaly) produce confusions between blue and green colors and between red and green colors, respectively. The absence of blue cone pigments, making colors more reddish, is very rare (tritanopia/tritanomaly). The two first cases are sex-linked, and may affect more than 5% of the male population. Some people may also suffer from low contrast sensitivity, a symptom of certain eye conditions or diseases. These differences in color vision and perception should be taken into account during the map design, so that everyone can still read the map. 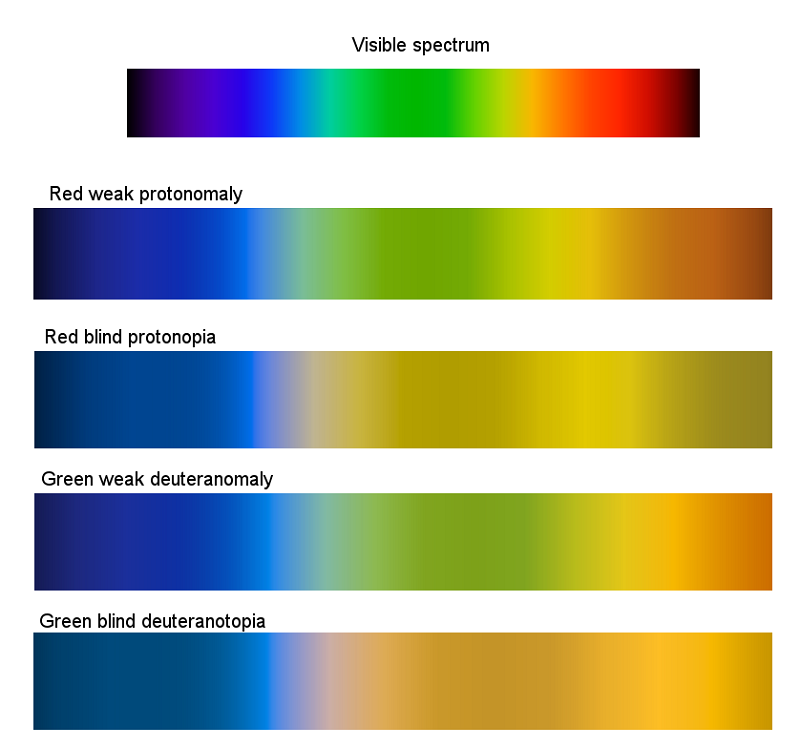 A number of color mixing methods and color spaces are available to reproduce colors for any media.

Color mixing refers to the process of combining primary colors to create new colors. There are two color mixing methods: additive and subtractive. The additive method (Figure 5a) combines red, blue, and green light to produce colors for television and computer displays; adding more colors (light) produces white light, and removing all color (light) produces a black screen. The subtractive method (Figure 5b) refers to how light is absorbed or absorbed by colored inks and pigments, typically cyan, magenta, and yellow; as more colored pigments are combined, more light is absorbed—that is, wavelengths are subtracted—which produces a darker color.

A color space is a specific organization of colors, where each color is characterized by a point in a tri-dimensional space: physically produced colors are mapped to an objective description of color sensations registered in the eye, typically based on three parameters. Four color spaces are in common usage; each suited for particular display types and tasks:

Gamut refers to the subset of possible colors that can be expressed from three primaries or within a given color space for a medium. Identical color reproduction cannot be guaranteed between media (when changing computer screens, a RGB code may provide various color sensations), but it is possible to transform the representation of a color from one color space to another. The CIELab gamut is larger, i.e., it has more colors, than the RGB gamut, which is larger than the CMYK gamut. Parts of the gamut therefore need to be approximated when transforming between models. For instance, when it is required to print an RGB image of a map, colors that fall outside the CMYK gamut means that the color cannot be reproduced in print and therefore must be shifted in some way. CIELab is used as an interchange format when graphics for print have to be converted from RGB to CMYK. Color conversion may be mathematically difficult to compute, but online tools exist to facilitate it (see Additional Resources). 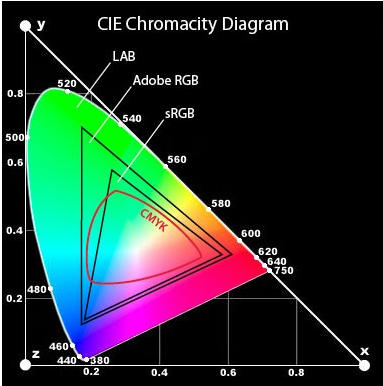 4. The Use of Color in Cartography and Data Visualization

Color is a powerful visual variable. Its easy digital manipulation in GIS and graphic design packages may result in many mistakes and misunderstandings from default or poor color choices. Combining colors in color palettes requires knowledge of color relationships in order to correctly encode information, guide visual attention, and establish or reinforce the visual hierarchy, achieving visual balance (See Visual Hierarchy & Layout or Aesthetics & Design (forthcoming)). Color has been extensively described in fundamentals papers and books for thematic and topographic map design. This section summarizes the main specific color issues which have to be taken into account for map and visualization design.

The color wheel is the starting point for combining colors: it is a color diagram representing color hues arranged circularly according to their chromatic relationships, designed by Newton in 1666. Color schemes are logical combinations made using the color wheel, enhancing color harmony. Color harmony is a satisfying balance between colors that make sense together (Sutton & Whelan 2004). Various color schemes, proposed by theoretical and practical knowledge in visual arts, are based on the seven color contrasts of Itten (1977): hue, light and dark, warm and cool, complementary, simultaneous, saturation, and quantity (See Additional Resources). There are four principal schemes (Figure 8):

In order to design better maps and visualizations, colors have to be properly chosen and arranged to correspond to the structuring of the data. A database of color palettes has been proposed targeting choropleth and qualitative maps, based on three types of color schemes, depending of the number of classes and the nature of data (Brewer, 1994, 2005):

Specific color issues may appear, according to the context of use (e.g., the map’s purpose, its intended audience, and format of use) and may have to be taken into account to support color perception and avoid misinterpretation. (see Usability Engineering & Evaluation, Map Interpretation):