An important operation in spatial analysis is to effectively combine data from different sources. Conflation is the process of combining “two digital map files to produce a third map file which is better than each of the component source maps” (Ruiz et al., 2011). The datasets in conflation typically share certain common features representing the same objects in reality, which need to be matched and merged.

Conflation is important in spatial analyses because different agencies and vendors, each with a different role and scope, often produce spatial data for the same type of objects. A typical conflation problem is the conflation of transportation networks. Due to the importance of roads as corridors of movement and a common reference system, many agencies and organizations provide transportation network data. Public agencies (such as US Census and USGS) maintain well-known road databases such as the TIGER/Line. Private vendors (such as TeleAtlas and Navteq) produce high quality network datasets for navigation purposes. Advancement of sensor technology and the open data movement have made more and more street network data (among other types of data) available to the public as Volunteered Geographic Information (VGI) (Goodchild, 2007). A transportation planner often needs to combine all sorts of information about transportation infrastructure and social-economic characteristics of the population from these data sources in their analyses.

Just like digitization and other data preparation processes, conflation can be a labor-intensive procedure. Due to the volume and the complexity of features in the datasets, conflation can be expensive and time consuming. By comparison, automated conflation methods try to match corresponding features and merge them automatically. Systematic conflation methods range from simple ones using standard GIS operations such as buffer and overlay analysis to more complex ones that measure the similarity between pairs of features and match features in light of spatial context and relations. However, fully automated feature matching and conflation is still difficult at present. For example, basic GIS operations such as buffer and overlay analysis do not work well with the presence of spatial displacement of features common in heterogeneous data. Figure 1 (Lei & Lei, 2019) demonstrates an example of spatial displacement using different road datasets covering Santa Barbara, CA (from Open Street Map, TIGER/Line and TeleAtlas, respectively). 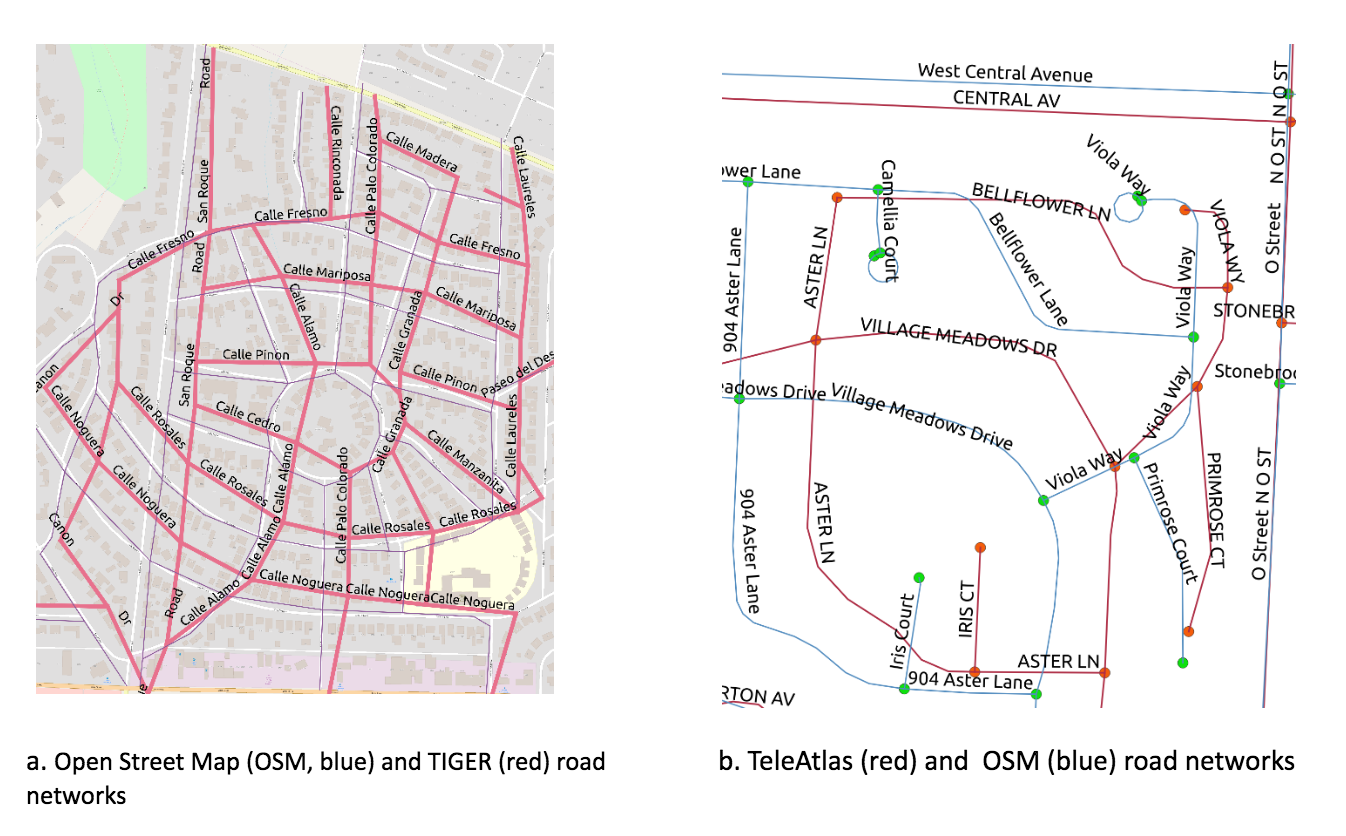 Other than manual conflation, computerized conflation methods typically use certain relations between candidate features from two datasets to find potential matches. An important characterization of the match relation between features is the “cardinality” of relations between entities from relational database theory. The cardinality of relation is the number of times of entities from one dataset can be linked to the entities in the other dataset. There are three cases of cardinality of relations. The first (and the simplest) case is the one-to-one matching relation in Figure 2a. This cardinality represents cases in which two corresponding features correspond to the same object in reality. 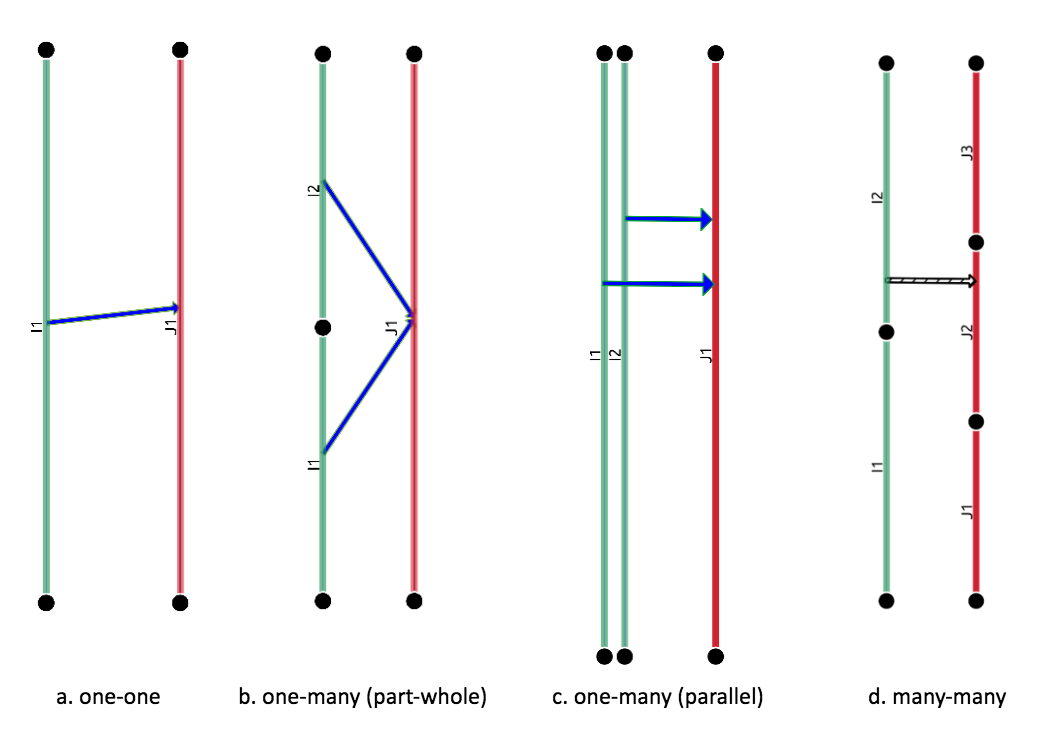 Figure 2. Cardinality of match for dataset 1 (green) and dataset 2 (red).

The second case is the one-to-many (1:m) matching relation. This case indicates the fact that a group of features in one dataset, when combined, represents the same object as one feature in the other dataset. This can happen, e.g., when a set of shorter road segments corresponds to a road that is represented as a single line in the other dataset (Figure 2b) or when a road is represented as one line in one dataset but two parallel lines (for the two directions of the road) in the other. The third case of cardinality is the many-to-many matching. This includes two-way one-to-many relations in which one-to-many correspondence exists both from dataset 1 to dataset 2 and, in the opposite direction, from dataset 2 to dataset 1. In addition, the many-to-many case also includes more complicated matchings (Figure 2d) in which no feature individually corresponds to a group of features in the other dataset. Features from the two datasets can only represent the same object in reality after grouping individual features in each dataset, respectively. Some conflation algorithms can handle only the simplest one-to-one conflation problems, while others can handle the more complex one-to-many and many-to-many problems.

To determine the relations between features, conflation methods typically compute certain metrics of similarity or dissimilarity (distance) between potentially related features. The metrics can be based on the geometry, the attributes (e.g. [7]), and topological relationships of the features involved. Similarity in geometry is a widely used metric, which compares the lengths, shapes and orientations of two features. A general method for computing the geometric difference between two features is the Hausdorff distance. Figure 3 demonstrates the computation of Hausdorff distance. For features A and B, the directed Hausdorff distance from A to B is defined as:

is the distance from a point p

A to the point set B. The directed Hausdorff distance

is defined to be the maximum of

. It is zero only when features A and B equal each other in geometry. Other distance metrics for measuring geometric differences exist. 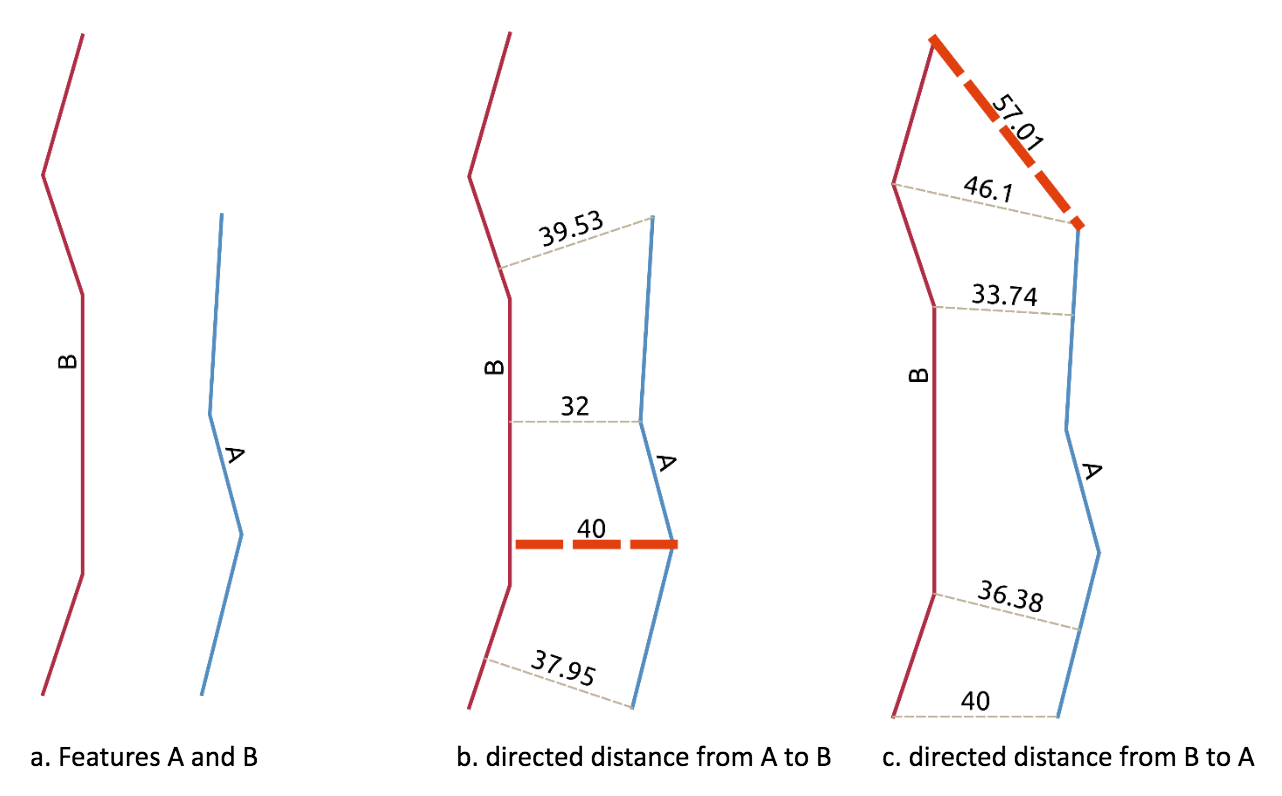 Figure 3. Directed Hausdorff distances between a pair of features from two datasets.

Given a metric of distance (or dissimilarity) between features (Section 3), a simple strategy of conflation is to match features that are the closest. The k-Closest Pairs Queries (KCPQ) seeks to find k pairs of features whose distances are the smallest [1]. However, such a strategy can be easily disrupted by the spatial displacement of features. In the examples in Figure 1. and the cover image, it can be seen that KCPQ can match some corresponding features correctly, while matching other features incorrectly when these features happen to be close to each other but do not represent the same object in reality.

Another commonly-used conflation method is based on buffer analysis and overlay analysis. For example, the simple buffer method [3] measures the similarity of two features as the percentage of one feature that falls in the buffer of the other. Similar to the distance based KCPQ, the buffer methods require the data to be well aligned before conflation.

The well-known “rubber-sheeting” method was designed in 1980s to deal with unevenly distributed location errors. It was one of the earliest systematic conflation method developed by US Census [9, 11] to conflate USGS data. The method selects a set of counterpart points as “anchors” to link two datasets, in such a way that each triangular region between the anchor points should have similar spatial displacement. The rubber-sheeting method then applies an affine transformation in each region to remove the spatial displacement so that a simpler method such as the buffer method can be applied. The rubber-sheeting method has been extended by researchers and is still in use in many GIS conflation tools nowadays. In general, the method is semi-automatic that can still require significant human intervention in choosing anchor points in the area.

There are also different ways of merging geometries. If one dataset has consistently higher spatial accuracy, one may use its geometries and discard the geometries of the other dataset. If two datasets have similar accuracy, one may compute an “average” geometry between two geometries of a pair of corresponding features. After feature matching and feature merging, one may need to evaluate the accuracy and quality of conflated product by comparing with a small set of conflation results performed by human experts (i.e. ground truth).

Conflation is closely related to database operations such as spatial join. Both involve combining information in input datasets. However, there are differences between the two processes. First of all, spatial join is a “local” operation based on selecting individual pairs of features satisfying a spatial condition. It is often performed in two stages [4]: 1) a filter stage in which potentially related objects are selected based on indices and bounding rectangles, and 2) a refinement stage that verifies candidate pairs using the full join condition. By comparison, conflation can consider a larger and more complex spatial context and can consider neighboring features, e.g. when using topology based criteria. Secondly, conflation can involve transforming and merging the geometries of the input feature, which typically is not performed during a spatial join.

Geospatial data conflation is also related to the concept of data fusion. In a broader sense, the two terms are sometimes used interchangeably, but data fusion is traditionally more commonly seen in Remote Sensing [10].