Digital Elevation Model (DEM): a three-dimensional representation of data to represent a terrain’s surface (topography) based on a regularly spaced rectangular grid, and is used as the generic term for DSMs (Digital Surface Models) and DTMs (Digital Terrain Models).

Elevation: the height or depth of a terrain element with respect to a vertical datum plane such as sea level.

Line-of-sight: the visual connections between two points (from observer to target point).

Network: a network is a graph that is made up of nodes (may refer to geographic entities as vertices) and connected by edges (may refer to links). It can be used to represent spatial relationships of adjacent geographic objects, such as constructing TINs.

Raster: a regularly spaced, grid-like data model to record, analyze, and visualize data with a continuous nature. The basic element is referred to as a cell, pixel, or grid point.

Raster cell: a raster cell is the basic unit of the raster data that stores a single value to represent a specific attribute.

Reverse viewshed analysis: determination of area (or places) from which the target point can be visible.

Surface: the outermost part of the water or land and all objects on it.

Terrain: the vertical and horizontal dimensions of the land surface.

Triangulated Irregular Networks (TINs): a representation of a continuous surface based on triangular facets used mainly for elevation modeling.

Viewpoint: a position from which people can observe other places.

Viewshed analysis: calculate the area that is visible from a given point.

2.1 Discrete Intervisibility Approach based on Line-of-sight

The core part of the visibility analysis with the raster-based DEM data refers to the inference of line-of-sight. Given certain terrain conditions, the line-of-sight indicates whether the targeting viewpoint can be seen from the observer viewpoint. In other words, it determines if there is a location whose elevation will block the sightline between the two DEM cells (i.e., observer cell and target cell). The target point is included in the viewshed if the line of sight is visible; while if the line of sight is obscured, the target point is not included in the viewshed. The computational process is illustrated as follows. 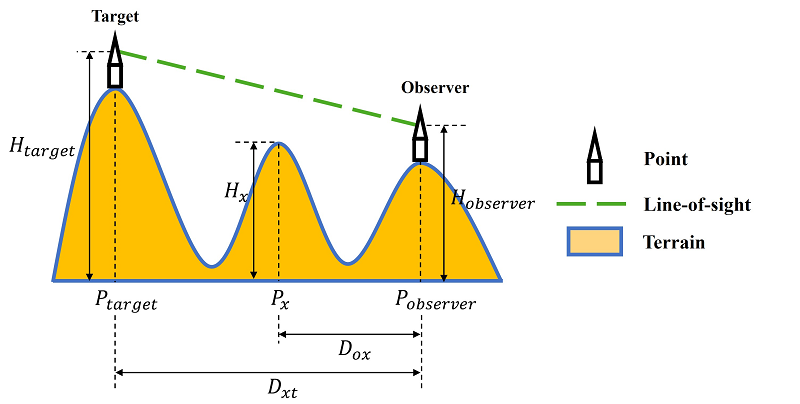 The following equation is used to compute:

If a target location can be seen from the distant observer point, the following condition must be met:

For the elevation Hx of any location between the two viewpoints Pobserver  and Ptarget:

Considering the size of the grid, the computation of intervisibility using discrete approaches often requires expensive computing resources, which can be accelerated by using parallel algorithms to take advantage of the spatial structure of raster data.

Computational geometry algorithms are employed for calculating the intervisibility of continuous data structures such as TINs where terrains are described as polyhedral surfaces. The strategy used to solve the hidden surface removal (HSR) problem for a 3-dimensional scene is adopted as a continuous intervisibility approach (De Floriani, 1989). Specifically, the visible image of a scene is created by: (1) projecting each face of the terrain surface from the viewpoint, (2) only the visible portions of each face of the scene are maintained using the HSR algorithm. 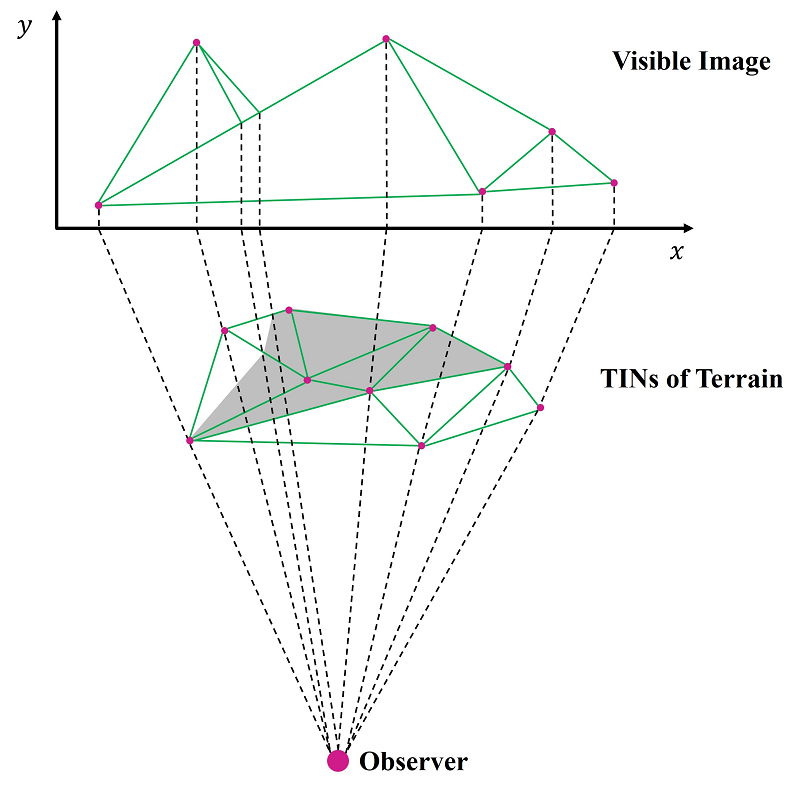 Figure 3. The visible image of the surfaces. Source: author.

Figure 4. An example of intervisibility between an observer point and a target group. Image source: author, with data from West Virginia View.

A viewshed identifies the entire area in the study area that can be observed from one or more viewpoints. To find the viewshed of a specific observation point based on DEM data, the line-of-sights between the observer point and all other cells are computed. The viewshed map is thus represented as an array of Boolean values to indicate whether each grid cell or pixel is visible or invisible. For TINs data, the viewshed can be obtained by overlaying the visibility maps of each terrain face.

Figure 5. An example of a visibility map. Source: author.

In addition to these three traditional types of applications, several recent use cases such as location accuracy assessment, interactive intervisibility analysis in 3D space, and viewshed analysis on hexagon are introduced in this section.

Placement of observation point problems is defined as finding the optimal locations for observation points so that as much of the terrain surface within the study area as possible is visible from at least one viewpoint. The goal of this problem is to either reduce the number of viewpoints to a minimum that covers the target area or to select a fixed number of points and maximize the visible area. For instance, in addition to the existing observer point, adding which candidate observation place would maximize the viewshed area from all viewpoints, as illustrated in Figure 6. Such a problem is relevant to the p-median and p-center problems in spatial optimization. Visibility analysis has been used for locating fire towers, water towers, radar sites, and other applications. 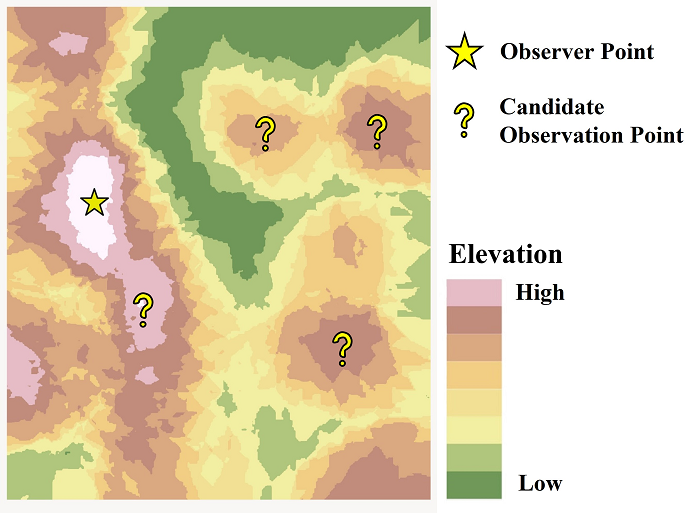 Finding the minimum number of viewpoints in the construction of a visibility network is referred to as the line-of-sight communication problem (De Floriani et al., 1994). The nodes in this visibility network correspond to observer locations, and the edges indicate the line-of-sights that connect any two consecutive viewpoints. As a result, any two consecutive viewpoints in such a network can be observed from each other. As shown in Figure 7, nearby wireless towers are connected by line-of-sights so that all three wireless towers are linked together. The solution to this problem could be used to build telephone, television, and digital data base stations.

The visible path computation problem refers to route planning considering visibility characteristics in terrains. Given two points (starting and destination point) and one or multiple observation points, the shortest path between the starting point and the destination point is considered a route. In practice, two types of paths are frequently computed when taking visibility qualities into account for route planning: smuggler’s paths and scenic paths. A smuggler’s path refers to a route with no points visible from observation points. On the contrary, a scenic path indicates a path in which all points are visible from the observation points (Lee & Stucky, 1998). The solution of the visible path computation problem has been widely used in several domains such as civil engineering, military activities (e.g., concealed passageways), and tourism route planning.

In the era of big data, crowdsourcing volunteered geographic information (VGI) has provided a large volume of geospatial data. The quality of VGI data such as location accuracy, data bias, and representativeness, serve as fundamental issues of its usage. Recently, several studies have employed visibility analysis to assess location accuracy. For example, Senaratne et al., (2013) and Kang et al., (2018) used reverse viewshed analysis to examine whether the geotags of photos are correct by investigating if the location of photos falls within the viewshed of the observer viewpoint. Photos taken nearby Eiffel Tower are collected and mapped in Figure 8. According to the reverse viewshed analysis, green dots indicate that people at viewpoints can see the Eiffel Tower, while red dots indicate those photos cannot observe the Eiffel Tower, and their locations may not be trusted. 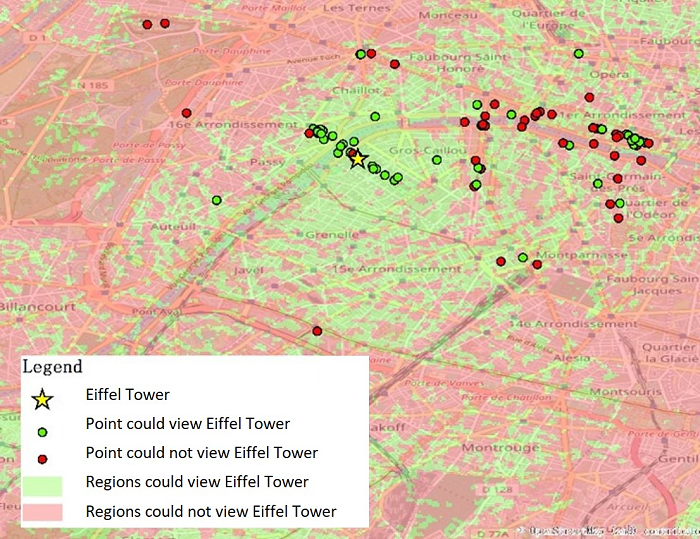 In addition to traditional static intervisibility analysis, researchers can perform dynamic real-time interactive intervisibility analysis in 3D spaces. ArcGIS Pro provides exploratory analysis tools in which users can customize line-of-sights and viewshed by interactively creating them in real-time. As shown in Figure 9, users can create an observer point by clicking on a specific place on terrain (here it refers to buildings). The viewshed along a pre-defined direction will be generated automatically. Users can also customize the parameters of the viewshed analysis such as minimum distance, maximum distance, and direction. Such a tool enables users to have real-time visual feedback in the simulated space.

The emergence of several new data sources and models provides new opportunities for intervisibility analysis, and they can be integrated to benefit future applications.

In addition to performing viewshed analysis on raster data based on rectangular or square raster cells, researchers have attempted to calculate viewshed on hexagonal grids (Qiang et al., 2019). To accomplish this, a binary visibility raster map is produced at first, which indicates the visibility of DEMs based on traditional rectangular raster cells. The proportion of a human observer’s viewing angle in a hexagon grid is then computed and multiplied by the viewshed raster map. Finally, the visibility of each hexagon gird is computed by summing up all intersected raster cells. Though traditional grid-based raster data remained important in the analysis, the integration of viewshed analysis with the increasingly popular hexagonal data provides valuable insights for future intervisibility-related studies with more data models.

Also, researchers have utilized higher resolution imagery from remote sensing imagery and unmanned aerial vehicles (UAVs) for modeling terrain surfaces. Such fine-resolution models bring both opportunities and challenges for intervisibility analysis. On the one hand, more fine-grained and precise intervisibility analysis can be performed to provide more accurate assessments and descriptions of viewshed on terrain surfaces. On the other hand, more computational resources are needed for obtaining the results.

Users can utilize visibility analysis functions based on Spatial Analyst Toolbox and 3D Analyst Toolbox in ArcGIS Pro and ArcMap for viewshed analysis provided by the ArcGIS family of products. TINs and DEM data are supported by these toolboxes. These ArcToolboxes offer a variety of visibility analysis functions including examining intervisibility, generating line of sight and viewsheds. ArcGIS Pro also provides a set of interactive exploratory analysis tools, as mentioned in section 3.5, that allows users to determine the 3D view of the viewshed and light-of-sight from a given observer point, as shown in Figure 4 and Figure 9. The viewshed and light-of-sight can be generated automatically by interactively moving the observer point. In addition, ArcGIS Online offers a “Create Viewshed” feature that allows users to perform viewshed analysis in WebGIS environments.

QGIS provides a Visibility Analysis Plugin that allows users to compute viewshed and examine the visibility of viewpoints (Cuckovic, 2016). More specifically, it provides the following functions including viewshed calculation, intervisibility network calculation, and visibility index. In comparison with ArcGIS, it only supports raster-based elevation data.

In GRASS GIS, the module r.viewshed can be used to determine the viewshed of a point based on a raster DEM. A raster map that indicates the visibility of each cell is produced given an elevation raster and the location of observer points. One unique feature of this algorithm is its optimization of the CPU usage and memory in accelerating the computing process of viewshed analysis. Consequently, r.viewshed is appropriate to compute viewshed even with very large rasters.

SAGA GIS provides the Visibility module for visibility analysis using point vector data and grid data that denotes the elevation of the terrain surface. The output visibility map of this function includes a raster layer that indicates the visibility of each grid cell.

Similarly, GDAL also provides a function gdal_viewshed to calculate the viewshed based on an input raster DEM and a user-defined point. A binary visibility raster will be generated to indicate the visibility of terrains.

In summary, all software and packages abovementioned offer the function to compute viewshed based on observation points and terrain raster layers. More functions are available in the ArcGIS family products and QGIS for more comprehensive visibility analysis.