The relational Database Management System (DBMS) is widely used in modern business systems. Entities and relationships from a data model are presented as relational tables. To store data in a relational database, a relation schema should be defined to specify the design and structure of relations. The schema design generally uses database normalization to reduce data redundancy and maintain data integrity. Users can retrieve and manage data in a relational database using Structured Query Language (SQL). To make spatial data fit the relational model, spatial vector geometry or raster data type can be customized by extending basic data types in relational databases. This further helps derive the so-called spatial object-relational DBMS, by manipulating vector geometry and/or raster data types as spatial objects using SQL queries. The performance of queries is improved by adding spatial indexes in relational databases.

The topic is also available in the following editions:

Relation: A relation corresponds to a 2-dimensional data table.

Tuple: One row or record of a relational table is a tuple.

Attribute: One column of a relational table corresponds to an attribute. Each column has a name for identification.

Domain: The value range of an attribute defines its domain.

Schema: Relation schema defines the structure of a relation. It describes how the data is organized in relational tables, formally represented as relationship name (attribute 1, attribute 2, …, attribute n).

A relational database management system (DBMS) is built on the theory of relational models proposed by E. F. Codd (1980). The data in a relational DBMS are organized in the form of relational tables. Taking the land parcel as an example, the parcel entity has some attributes, such as shape, area, and land use. It can be organized like Table 1, formally presented as Parcel (Parcel_ID, Shape, Area, Landuse). It follows a relation schema with basic data types predefined. In terms of unstructured data such as geometries or images, they can be stored using the binary large object (BLOB) instead of normal field data (See Section 4 below for details). Several fundamental concepts associated with the relational model are defined above.

Users can access and manage data in databases using Structured Query Language (SQL). SQL was proposed in 1974 and become the international standard for relational DBMSs in 1987 (Chamberlin, 2012). It is a comprehensive, powerful, and simple language, capable of data query, manipulation, definition, and control. Basic SQL queries and other operations provided by relational DBMSs can be written as statements in the form of commands and are integrated as small programs enabling users to add, modify or retrieve data from database tables (Date, 2011). Listing 1 demonstrates how to create the Parcel table in a database and how to get the number of records where the Area is great than 10 hectares.

In a relational DBMS, the basic single unit of processing is called a transaction. The transaction possesses four important properties: Atomicity, Consistency, Isolation, and Durability (ACID). ACID guarantee the consistency of the database when performing the read, write, and modification tasks in a database.

Data modeling is the process to map entities and relationships into data structures supported by databases. In the conceptual modeling phase (see Conceptual Data Models), the entities, relationships, and attributes should be analyzed based on the business needs. The entity-relationship (ER) diagram (see Conceptual Data Models, Logical Data Models) is a commonly used approach to perform this task. A set of symbols, such as rectangles, ovals, diamonds, and connecting lines, are defined in ER diagrams to represent entities, associated attributes, and their relationships. For example, a land parcel management system requires the following information for parcels, such as the parcel shape, the owner, and irrigation wells. Figure 1 illustrates the parcel, owner, and well entities, and relationships between them. The 1:n  notation in Figure 1 indicates the two entities have a one-to-many relationship. Specifically, one person can own several land parcels, and several wells can be located in one parcel. 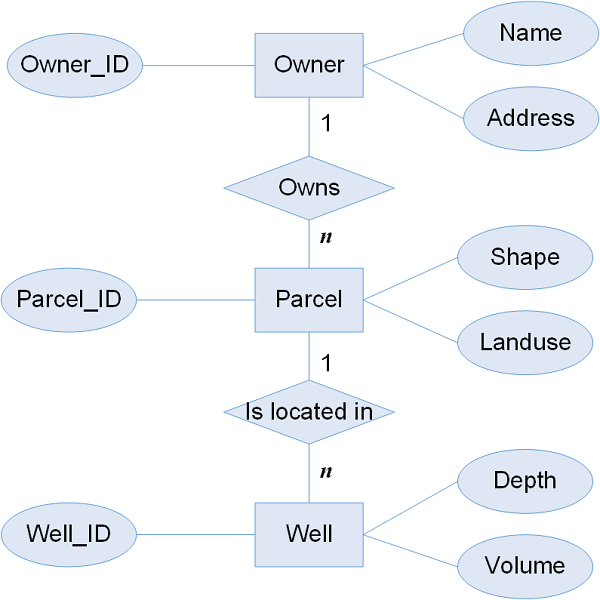 Figure 1. The ER diagram of the land parcel. Source: authors.

In the logical modeling phase (see Logical Data Models), the ER diagram should be translated into specific data structures supported by the underlying database. For a relational DBMS, the ER diagram needs to be translated into relational tables.  Usually, an entity is converted into a relational table. For example, the Parcel entity can be formally presented as a Parcel table: Parcel (Parcel_ID, Shape, Landuse). The primary key in the relation is underlined. A relationship between two entities can be converted into a new table or merged into existing tables as new columns. For example, the relationship between the Parcel and Owner entities can be converted to a new table: Parcel-Owner (Parcel_ID, Owner_ID), or the Owner can be attached to the Parcel table: Parcel (Parcel_ID, Shape, Landuse, Owner_ID). The conversion can be fine-tuned using database normalization. After finishing the logical modeling, the physical modeling (see Physical Data Models) should be conducted including the design of the data index and storage structure.

The relational operations include query, insert, delete, and update operations. The query operation employs relational algebra to perform queries and produce results as a new relation. Some primary operations of relational algebra are selection, projection, cartesian product, union, intersection, and difference (Figure 2). The selection and projection operations are used to select rows and columns respectively in a table. The cartesian product, union, intersection, and difference operations are defined from the set theory to operate on two tables. Additional operations can be derived from these operations. For example, the join operation can be implemented with the cartesian product and selection operations. The inner join results in the intersection of two tables (Figure 3a). The union of two tables is the outer join, which can be classified into the left, right, and full join (Figures 3b-d). In addition, indexing is often employed in databases to improve the performance of operations (see Physical Data Models). For example, in a relational DBMS the B-tree and B+ tree are commonly used as indexing methods on data. 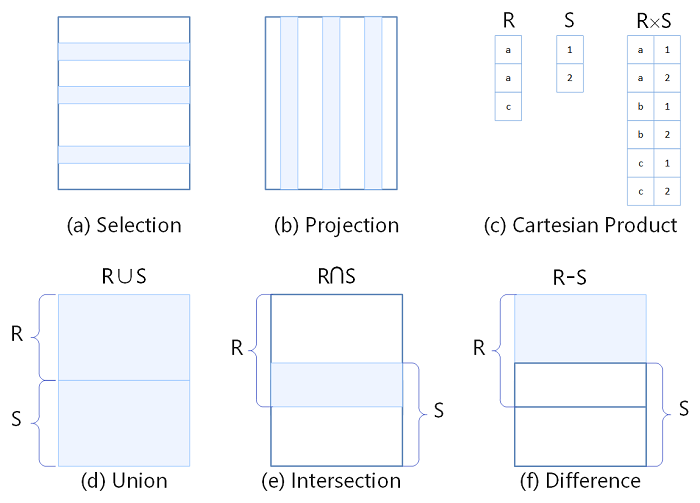 Database normalization is used to guide the design of relational tables to reduce data redundancy and maintain data integrity (Kent, W., 1983). There are various levels of normalization, among which the first normal form (1NF), second normal form (2NF), and third normal form (3NF) are main forms. Take a land parcel database as an example, the following demonstrates how to employ the normal form to optimize relational tables. 1NF states that each column contains atomic values that cannot be divided. In this aspect, a single table Parcel-Well-Owner (Parcel_ID, Shape, Landuse, Well_ID, Depth, Volume, Owner_ID, Name, Address) containing all entities and relationships can be constructed. The attributes (Parcel_ID, Well_ID) can uniquely identify each tuple, and they serve as a composite key in the relation. 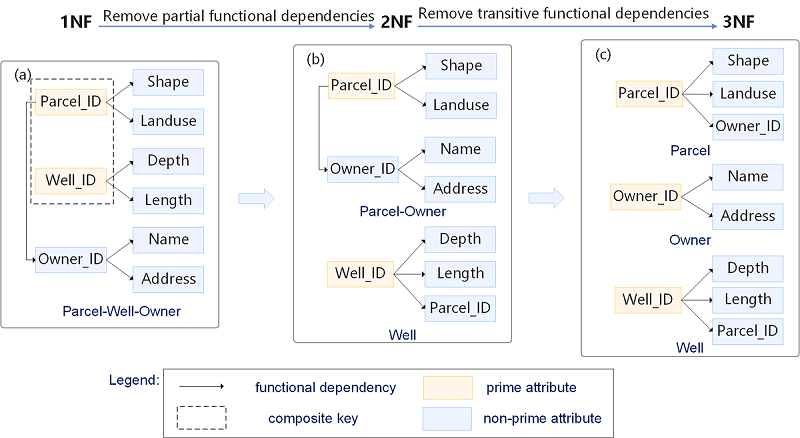 Spatial data are often represented using vector or raster data structures. To accommodate them in a relational data model, specific strategies are often needed (Yue & Tan, 2018). With regards to vector data, spatial entities such as points, lines, and polygons can be converted into new relational tables. The images as unstructured data are often stored using the BLOB column in a relational table. It is also possible to store spatial entities as a new BLOB column in existing tables, since the geometries are also a kind of unstructured data composed by a list of coordinates. Modern relational DBMS borrow ideas from object-oriented paradigm, and defines spatial data types (e.g. point, lines, and polygons) as objects on top of BLOB, thus making a relation database capable of operating on spatial objects. This is the so-called object-relational database.

Figure 5a shows a relational approach without explicit support of spatial data types. The spatial entities and relationships can be organized into different new relational tables. A parcel has boundaries and the boundaries are defined by road segments in order. Each segment has start and end nodes, and each node has x and y coordinates to identify its position. Thus, the spatial information of a parcel can be represented using three relations: Node (ID, X, Y, Name), Segment (ID, Start, End, Length), and Parcel (ID, Segment, Area, Landuse). A complex spatial entity can be assembled by joining multiple data tables. Although this approach fits the relation data model, it stays at the theoretical level and does not perform well in practice. The multi-table join operation significantly lowers the performance of queries and make the vector data update difficult. Thus at the beginning of this century, some GIS vendors such as ArcGIS and GeoStar, employ BLOB, a built-in type in relational DBMS, to host the spatial data, shown in Figure 5b. Specific GIS middleware for spatial data storage such as ArcSDE is needed to process the BLOB to allow spatial indexing and operations. The middleware is a mediator between GIS software and relational DBMS data storage such as SQL Server or Oracle databases. It includes the definition of spatial abstract data types and their operations. These data types and operations are standardized by the Open Geospatial Consortium (OGC) through the OGC Simple Feature Access specification (Herring, 2011). The OGC Well-Known Binary (WKB) representation for geometry can also be used in BLOB.

Some database vendors also realize the aforementioned issue and provide spatial extensions in their own database products (Date & Darwen, 1998). They follow the object-relational model by extending the relational model to support the storage and management of unstructured data with customized object data types. The spatial object type in the object-relational DBMS is used to store spatial data, shown in Figure 5c. One typical example is the Oracle Spatial software. Moreover, a set of built-in functions operating on the spatial objects are provided. Spatial indexing is also supported on the spatial objects to improve the performance of queries for spatial data. Since the extensions are provided by database vendors, the solutions are often more effective and efficient than the relational approach or GIS middleware for spatial data storage. 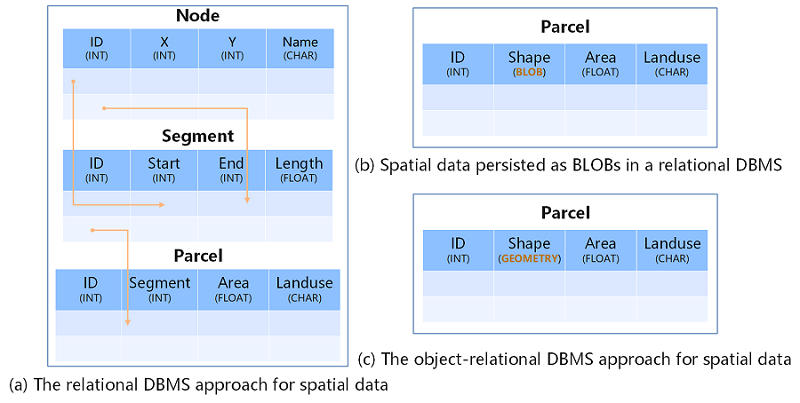 The spatial operations are extensions in a relation DBMS for querying and manipulating spatial objects (Güting, 1994). Many spatial relational DBMSs support spatial operations according to the OGC Simple Feature Access specification (SFA) for SQL (Herring, 2010). The spatial operations can be classified into three categories: basic methods on geometry, such as Dimension() and Boundary(); methods for testing spatial relations between geometric objects, such as Equals() and Within(); methods that support spatial analysis, such as Buffer() and Intersection(). There is also a standard from ISO, ISO/IEC 13249-3 SQL Multimedia - Spatial standard (SQL/MM), which extends the OGC SFA with more Geometry subtypes such as curves and topology-network primitives.

1. What is a Relational Database (RDBMS)?  https://www.oracle.com/database/what-is-a-relational-database/