It is also available in an earlier edition:

Spatial Analysis: In GIS, spatial analysis is a collective term that refers to any process that manipulates or synthesize spatial data to explore spatial patterns or to examine spatial relationships among geographical features. It embraces a broad spectrum of spatial data techniques such as spatial queries, vector and raster GIS data handling operations, and spatial statistics.

Spatial query: A search of features based on their spatial relations with other features. It is a crucial comprising part of spatial analysis in GIS.

Spatial relation: A relationship between spatial features with regard to their spatial locations and spatial arrangements. Three general categories of spatial relations have been identified in the GIS&T literature, including proximity (or distance-based) relations, topological relations (e.g., connectivity, containment, and adjacency), and direction relations.

Feature: A digital representation of a geographic object (e.g., a house, a road segment, a county) or event (e.g., a traffic accident) located in space. A feature in a spatial database is represented with data of its spatial footprint and attribute information.

Feature class: a collection of geographic features of the same kind.

Topological relations: The type of spatial relations unaffected by bi-continuous transformation, such as stretching, shifting, rotating, or bending, of the involved spatial features.

Proximity relations: They are also called distance-based relations and refer to the spatial relations based on distances between features.

Depending on the reference feature type, a spatial query may involve one or more GIS feature classes. The following are three possible scenarios.

Three types of spatial relations have been studied and have received considerable research attention in the GIS&T literature: proximity relations, topological relations, and directional relations.

Proximity relations are distance-based and are also referred to as distance relations. A proximity relation can be expressed either quantitatively as metric distances or qualitatively as verbal descriptions such as near or far. A GIS software program typically has powerful built-in capabilities to calculate various types of quantitative distance measures.  In spatial queries, the most commonly used are Euclidean distances and distances in a connected network. Table 1 provides a real-world query example for the corresponding distance measure. QE1 (query example 1) searches for buildings in a proximal area exposed to noise hazards from a state highway. It adopts the Euclidean distance to search for buildings within 1 mile of the highway segment. In QE2, the concern is about the travel distances to healthcare facilities. Qualitative expressions of proximity are often needed in spatial queries in everyday lives. For example, QE3 inquiries about nearby hotels of a conference venue in Chicago. Not many GIS programs currently support spatial queries with qualitative proximity relations, although theoretical discussions and modeling strategies are available in the literature. One approach is to establish fuzzy mapping mechanisms between qualitative and quantitative measures, contingent upon context variables (Yao & Thill 2005; 2006). Also, some online GIS services and open-source tools are available to provide spatial search capability with qualitative distances.

Topology is a branch of study in mathematics. It studies the characteristics of spatial relations invariant by bi-continuous transformations such as stretching, shifting, rotating, or bending. Adjacency, connectivity, and containment are typical examples of topological relations. A naïve view of topology sees the relations as geometry on a rubber sheet, as topological relations between two spatial features on a rubber sheet are preserved even when the sheet is stretched, shifted, rotated, or bent.  A large body of research has focused on formalizing and reasoning topological relations, ranging from the point-set theory (Egenhofer and Franzosa 1991), the intersection model (Egenhofer and Franzosa 1991) and its extensions, to the Region Connection Calculus (Randell et al. 1992) and its extensions (e.g., Cohn and Gotts 1996).

Table 2. A Classification of Some Common Topological Relations Between Two Spatial Features 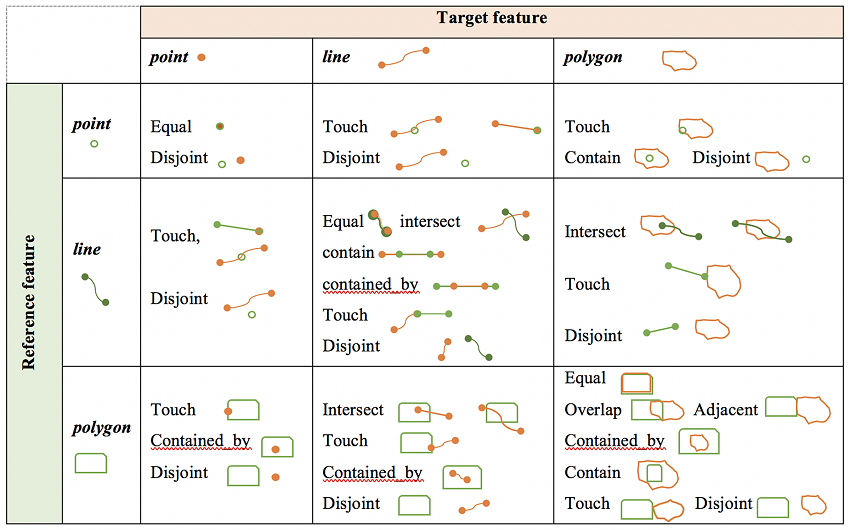 Direction relations are based on the angular separation between two spatial objects, as viewed from the reference point. Just like proximity relation, a direction relation can also be expressed either qualitatively or quantitatively. A quantitative measure of the direction from a reference feature to a target feature is relatively easy to calculate in GIS. In Figure 1, the direction-based spatial query is to find buildings in the study area in the downwind from a reference feature (QE7). Different reasoning models may be possible. In this illustrated example, a hypothetical parallelogram is created along the window direction. The query results would include all the buildings that are entirely within or intersect with the parallelogram. 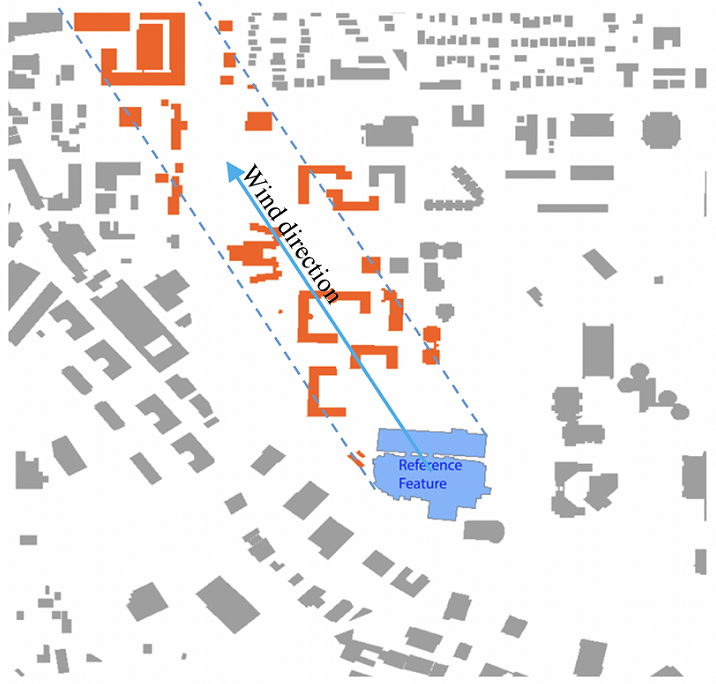 Figure 1. A direction-based search from a reference feature. Source: author.

Compared with the quantitative directions, qualitative direction measures are used more often. They are also referred to as cardinal directions such as north, south, east, west, southeast, southwest, northeast, and northwest, which are defined by a look-up table indicating the corresponding range of angles for each direction. These cardinal directions are not directly understandable by GISs. Modeling direction relations in a computer system has attracted much research attention in the past decades. The earlier frameworks, such as the cone-shaped (or triangular) model (Peuquet and Zhang 1987) and the projection-based model (Frank 1996), have laid the foundation for more recent extensions. Figure 2(a) illustrates the framework of the cone-based model. Figure 2(b) is an application example of implementing the model for spatial queries. In QE8, the query investigates cabins (target features) to the south of the lake, the reference feature. From the reference feature's geometric center, the model partitions the surrounding geographic space into eight sectors corresponding to the eight cardinal directions, respectively. The target features in the S sector are the query results.

Figure 2. Cone-based model (adapted from Frank 1996) and its application to answer a query example (QE8: “which cabins are to the south of the lake?").  Source: author.

The projection-based model is another influential framework. As shown in Figure 3(a), the projection-based model singles out a central area, which can be the bounding box of the reference feature, and partitions the outside areas into eight regular direction tiles corresponding to the eight cardinal directions. Based on the framework, some spatial analytical models have been further developed to deal with more complex situations or make the process more computationally plausible. Among them, the direction relation matrix (DRM) model is a widely adopted example. The DRM model (Goyal & Egenhofer 2001) formalizes the reasoning process by defining a direction relation with a matrix expressed in Equation (1). If an area is considered a set of all points within that area, the areas in Equation (1) refer to those point sets illustrated in Figure 3(b). The set intersection operation of two sets, denoted as Ç,  produces the subset of points that are in both sets.  The model can deal with more complex situations, for instance, when a target feature crosses multiple direction tiles. 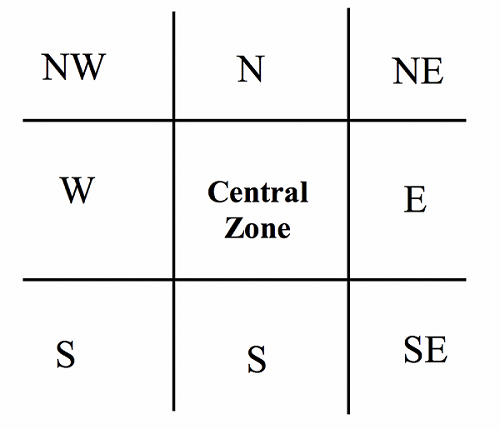 Based on the framework, some spatial analytical models have been further developed to deal with more complex situations or make the process more computationally plausible. Among them, the direction relation matrix (DRM) model is a widely adopted example. The DRM model (Goyal & Egenhofer 2001) formalizes the reasoning process by defining a direction relation with a matrix expressed in Figure 4. If an area is considered a set of all points within that area, the areas in the matrix refer to those point sets illustrated in the map of Figure 4. The set intersection operation of two sets, denoted as Ç,  produces the subset of points that are in both sets.  The model can deal with more complex situations, for instance, when a target feature crosses multiple direction tiles.

Figure 4. Illustration of point sets and the definition equation for the direction-relation matrix (adapted from Goyal & Egenhofer, 2001).  Source: author.

A spatial query does not have to be limited to one spatial relation only. It is not rare to find a query based on a combination of multiple spatial relations. This may happen due to several reasons. Discussed here are just two common reasons. First, it may be due to the nature of the query problem. For instance, QE7 and QE8 might need to be modified in the real world to find houses or cabins within certain threshold distances. The modified queries would combine a proximity relation and a direction relation. Second, multiple spatial relations are sometimes necessary with practical considerations of precision or other data quality issues. For example, a user wants to find all traffic accidents on a specific highway. This can be translated into a spatial query based on the topology relation “touch” between a point and a line feature, as listed in Table 2. However, due to precision and accuracy reasons, many qualifying accident locations would be missed if only the “touch” topological relation is considered. The problem can be resolved by modifying the query to include all accident locations within a threshold distance to the line feature. The modified query combines topology and distance relations.

As discussed above, spatial reasoning frameworks and analysis models have been developed for each type of spatial relations. Although some of them are integral parts of popular GIS software programs, not all of them have been developed into software tools in the GIS programs. Depending on the availability of functions and tools in off-the-shelf GIS software, there are generally three approaches to carrying out a spatial query. The most popular way is to use inherent spatial query functions in a GIS program. The second is to run SQL statements in GIS or any general-purpose spatial database management system. The last approach is to develop customized tools for queries. While each method has its advantage and disadvantages, the good news is that their edges are complementary to each other.