MPI (Message Passing Interface) is a widely used message passing library for writing parallel programs. The goal of MPI is to establish a portable, efficient, and flexible standard for message passing that will be widely used for writing message passing programs. This chapter motivates the need for using MPI for implementing GIS applications and introduces MPI data types and communication functions. Then, it presents new spatial data types and operations on them using MPI. Finally, it presents pseudocode for parallelizing a range query problem and spatial domain decomposition in GIS.

This topic was first published on May 2, 2019. No earlier editions exist.

Process: A program in execution or a running program. Operating systems schedule different processes to run on a CPU.

Parallelism: Using multiple processes or threads to solve a problem.

Distributed Memory: A network of inter-connected processors each of which has its own private memory. For instance, if a processor needs to access memory of another processor, then it has to perform communication. One way to do so is via passing messages using MPI.

MPI (Message Passing Interface) is a portable, standard interface for writing parallel programs using a distributed-memory programming model (MPI 2015). It is widely used for writing parallel applications, particularly in science and engineering domains. MPI programs run on a variety of systems including small compute clusters and supercomputers. The interface contains functions for communication and computation among other processes. Popular MPI implementations include MPICH, MVAPICH and Open MPI. Communication among processes is required because processes do not share memory among themselves. MPI supports parallel I/O, i.e. reading and writing data by multiple processes in parallel to increase the performance. MPI programs are typically written in C/C++ and Fortran.

MPI provides a rich set of predefined datatypes (Gropp et al. 1999). For example, MPI_INT is for an integer type and MPI_FLOAT is for a single precision floating point type. However, new derived types are required to represent spatial data that are supported by Open Geospatial Consortium standards. MPI allows user-defined types that can be used to define Cartesian coordinates. 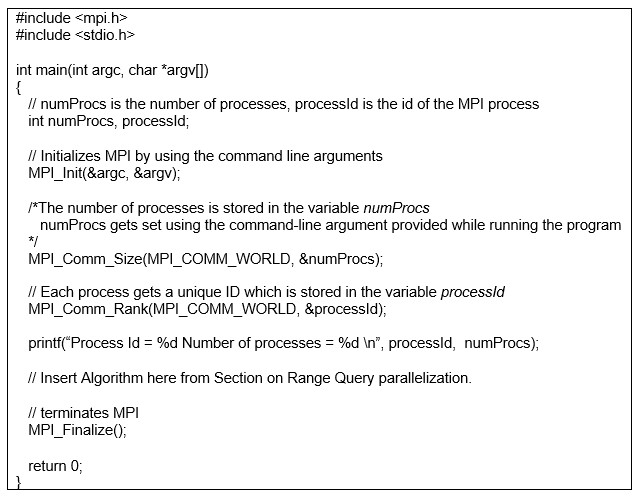 Figure 1. An example of a simple MPI program with basic functions.

When this program is executed, it will print 0, 1, 2 and 3 for processId and numProcs will be 4.

MPI allows creation of user-defined spatial data types. Implementing spatial data types is motivated by the fact that user-defined data types and operations not only enhance the abstraction and reusability of a system, but also performance in case of MPI in the presence of hardware support. Some of the data types are shown in Table 2. For instance, MPI_Rect can be defined as a contiguous type of 4 floating point numbers. Based on these spatial types, additional compound types such as multi-point and multi-line can be defined as well.

In a distributed memory system, processes do not share memory. When multiple processes are running in parallel in such a system, they perform some computations followed by exchanging messages. For example, if process A sends an integer to process B, then using MPI, process A executes MPI_Send function. Process B executes MPI_Recv function. Table 3 contains the function prototypes for send and receive functions.

In MPI_Send function, a process needs to specify the destination process, the datatype, and count. If the datatype is a scalar quantity, then the count is 1. If the data to be sent is an array, then the length of the array needs to be specified as count. In the MPI_Recv function, the status argument also needs to be specified. In addition to functions for communication, MPI also supports functions for computation among processes. MPI_Reduce function reduces values on all processes to a single value. For example, if processes 0 and 1 have values 10 and 20 respectively, then using sum reduction, the result will be 30. Instead of sum, other operations like min and max can also be used. The reduction function can be extended to handle GIS functions as well.

In MPI, if a process wants to share an item with another function, a send function needs to be invoked from a sending process and receive function needs to be invoked by a receiving process. Table 3 shows how to express message passing between two MPI processes using Point data. Point is defined as a user-defined data type using C structure. In some applications, there can be more than one pair of MPI send and receive function calls. To distinguish different types of such messages, each message has integer valued tag associated with it. MPI send and receive have similar syntax with an exception that MPI receive has an additional parameter called MPI_Status that can be used to get information about the received message.

With derived data types, existing MPI reduction operators like MPI_MIN do not work. The min operator can be used to find the line/rectangle with minimum length/area among processes. To implement it, a user-defined function is required that generates a MBR of geometric union of rectangles (Puri et al. 2018). It should be noted that reduction is limited to associative and commutative functions. Spatial data types and reductions make MPI spatial-aware.

Table 4. Example of MPI Usage in the C Language. 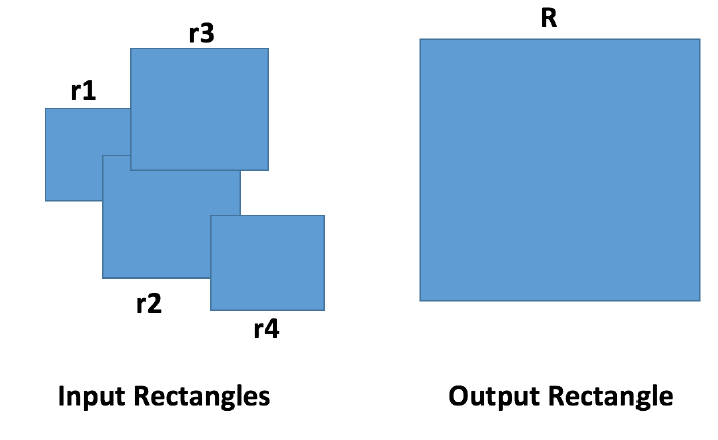 Figure 2. An example of the union type of spatial reduction.

Below is an example of a two-dimensional range query using a query rectangle. 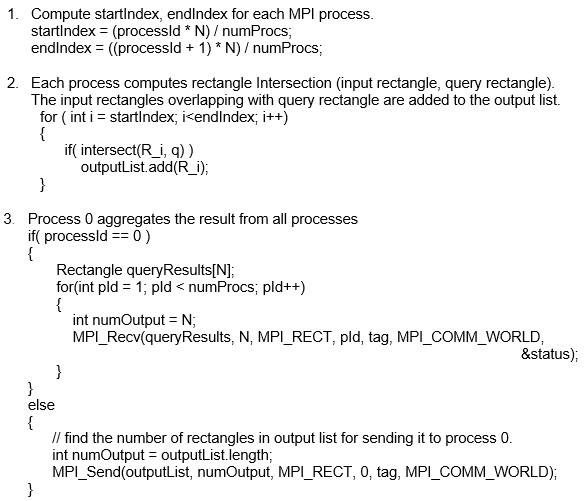 In Step 3, Process 0 uses receive function to gather data from other processes in a loop. It should be noted that a receiving process (with rank 0) does not know how many query rectangles it will receive from other processes. The exact number is only known by each sending process (with rank 1 to numProcs – 1) at runtime. However, the maximum count can be no more than N. As such, the count variable in MPI send function is set as N. The exact number can be extracted from the status variable by the receiver. Step 3 can be implemented using the MPI_Gatherv function as well instead of multiple point-to-point messages (MPI 2015).

Domain decomposition requires data stored in an arbitrary order to be partitioned among processes where each partition is assigned to an MPI process. For parallel processing in GIS, spatial data is often partitioned using a uniform or adaptive grid. Each partition is assigned to unique process to carry out spatial computation using the data in the partition. Operations like range query can be parallelized in an efficient manner if the data is already partitioned among processes.

In this section, we will discuss the partitioning of a set geometries using a uniform grid with C cells. Let us assume there are N polygons and P processes. Each process has access to only a portion of the data stored in disk as shapefiles. Figure 2 shows the distribution in a uniform grid with 4 cells and 2 processes. We can see that geometries read by an MPI process locally is projected to a grid by process P0 and P1. Shaded area represents tasks assigned to each process. Here, a task means computational work associated with a grid cell. The first process reads 4 blue geometries and a red geometry. The second process reads 4 red geometries in the third and fourth quadrants. After partitioning, each cell in a grid should contain only those geometries that overlap with it. In order to do so, the first step is to determine the four corners of the grid. This can be done by a reduction operation. A union of all the geometries would produce the dimension of the universe as shown above in Figure 2.

For spatial partitioning, the dimension of the universe needs to be determined which is an MBR spatially containing all the geometries read by all the processes. New MPI UNION operator on MBRs can be used to find the grid dimensions from the union of MBRs generated by individual processes during data partitioning. This can be done in two steps. In the first step, each process computes an MBR containing all the geometries it reads. The second step requires spatial reduction using union operation that we covered earlier. Then the dimension of grid cells is computed based on the number of partitions required.

C cells can be assigned to P processes in a round-robin fashion. For instance, in Figure 3, cell I and II is assigned to the first process and the remaining cells are assigned to the second process. A geometry from a 2D map may belong to one or more cells and since we know the bounding boxes of all the grid cells, each process can determine to which cell(s) a locally-read geometry belongs to. As such, based on the X and Y coordinates, each geometry is mapped to a cell in a 2-dimensional uniform grid. Since geometries belonging to a grid cell may not be locally available to the cell owner, a communication step is required to complete the domain decomposition. As shown in the figure, P0 needs to send geometry A to P1. This ensures that P1 gets all the geometries that are in its spatial domain. 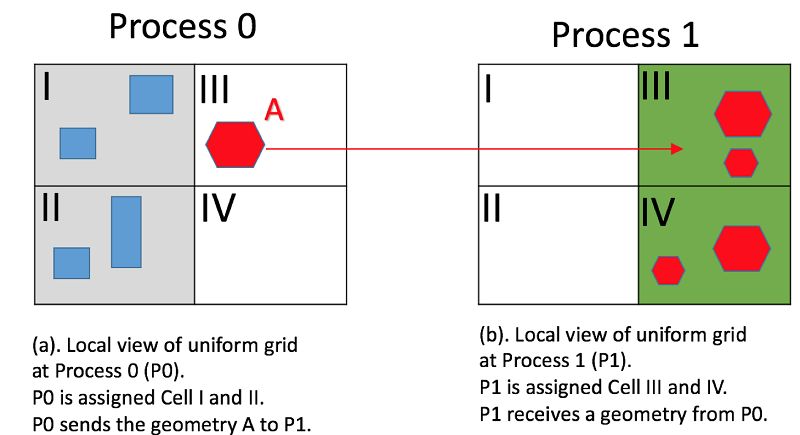 To summarize, we covered a few MPI functions here. MPI is a distributed memory programming model. MapReduce is also a distributed memory programming model. However, MPI is different when compared to MapReduce. MPI requires that the parallelism is coded explicitly by the programmer. A programmer has to devise strategy to partition the problem (domain decomposition) into tasks so that a process is responsible for a subset of tasks. Potential challenges in MPI programs include deadlocks and load imbalance.

This work is partly supported by the National Science Foundation Grant No. 1756000.