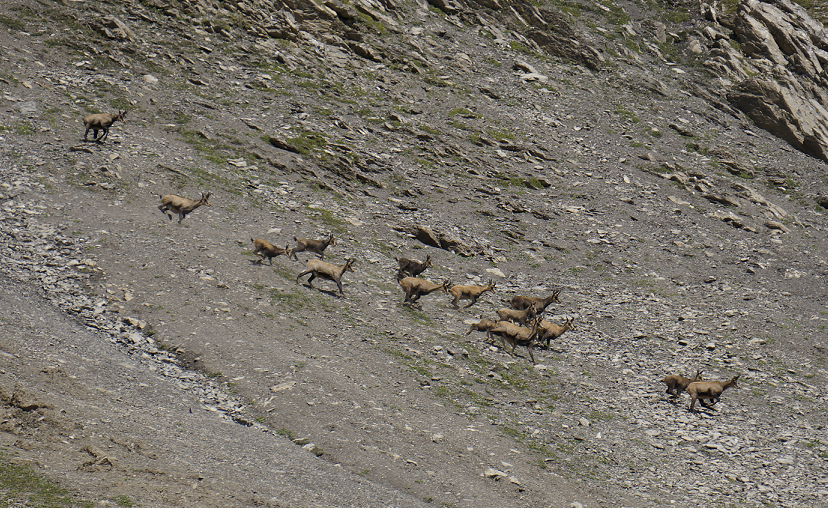 Computational Movement Analysis (CMA) is the interdisciplinary research field studying the development and application of computational techniques for capturing, processing, managing, structuring, and ultimately analyzing data describing movement phenomena, both in geographic and abstract spaces, aiming for a better understanding of the processes governing that movement (Laube 2014, p. 4).

Understanding how and why people, animals, goods, and more generally things move about in space-time is one of the fundamental questions in geography. Early work on movement analysis in GIS&T was very much data and technology driven, mainly triggered by technological progress in GPS tracking technology (Laube 2015). Whereas GPS data of a dozen caribou offered previously unseen tracking data two decades ago, today we are not that far away from tracking populations of entire countries via mobile phone data. Movement data is inherently spatio-temporal and hence allows adding true dynamics to the otherwise predominantly static GIS&T environment. Major achievements in CMA have emerged from the field of movement ecology, where biologists strive for a better understanding of animal movement. Other important application areas of CMA include transportation research, surveillance and security, marketing and consumer behavior, and increasingly also sports analytics.

Movement always happens in a space enabling and possibly constraining that movement. Be it animals that move through their habitats, cars driving along streets, people commuting through public transit, or shoppers browsing a mall – the characteristics of the spaces containing the movement have a big influence on the movement itself. From a computer science perspective, both the movement and its embedding space must be modeled using conceptual models such that movement analysis becomes possible in a computational environment (Laube 2014).

Within any GIS&T environment, the classic entity- and field-based conceptual models for representing space lend themselves as basic movement spaces. These two are then complemented with network spaces for street networks and public transit. Often, such 2D-spaces are extended to include a third temporal dimension (x, y and t for time) making reference to Hägerstrand’s time geography. The model for the movement space then rules how the movement itself is modeled, and subsequently what analysis techniques are possible: Whereas, for example, a 2D Euclidean field-space produces trajectories as sequences of x, y and t-tuples, a transportation network rather produces trajectories in the form of sequences of visited network edges or nodes (Andrienko et al. 2008, Laube 2017). Movement in the space-time cube, by contrast, can be modelled as space-time paths or lifelines or then space-time prisms representing the potential movement given some constraints (e.g., maximal speed). These three different forms of movement illustrate, how subsequently different algorithmic approaches for analyzing the movement are required. Trajectories can be tackled with time-enabled approaches for line analysis (e.g. polyline similarity measures). Space-time prisms analysis requires rather complex 3D volume intersections. Finally, node sequence data can be analyzed using sequence mining algorithms, akin to association rule mining.

Obviously, movement data is spatial, so it comes with all the known issues of spatial data, including questions about reference systems, data quality issues (inaccuracy, uncertainty), scale issues, and autocorrelation. Importantly, movement data is also temporal, still challenging rather static GIS&T with the inclusion of temporal reference systems, temporal relations, temporal granularity or sampling issues, and questions about temporal autocorrelation. Tracking data quality is clearly an issue for CMA in GIS&T, especially when inaccurate positional data is used for computing descriptive parameters such as speed, turning angle or sinuosity. Equally important when deriving such movement attributes is scale, or here the spatio-temporal sampling granularity (Laube and Purves 2011).

A first crucial task is enriching trajectories with descriptive variables such as speed, step length, acceleration, turning angle, or sinuosity. A second key trajectory operation is segmentation, decomposing the trajectory into self-similar segments (Buchin et al. 2011). Very often a first segmentation will separate moves from stops, that is periods when the object is not moving at all. This may be important with tracking systems that keep recording positions whilst the object is static, potentially producing pseudo-movement resulting from inaccurate measurements rather than actual movement.

Comparing trajectories is a further important trajectory operation. Comparing trajectories is important for grouping or clustering objects that express similar or dissimilar movement. This is another good example of the importance of the modeling process in CMA, as the different conceptual models used for movement will require rather different trajectory similarity measures (Toohey and Duckham, 2015). The catalogue of proposed approaches reaches from geometry-based line similarity measures to time series analysis to edit distance concepts borrowed from string analysis and genetics (Dodge et al. 2012). Once a suitable similarity metric has been found, conventional clustering techniques allow grouping of objects according to their movement properties.

The search for salient movement patterns clearly is one of the key promoters of CMA within GIS&T. Movement patterns can refer to frequently used routes by commuters, spatially-explicit manifestations of animal behavior such as hunting excursions of feral animals, or arrangement and coordination patterns relating sets of mobile objects such as flocking, convoys, or leadership (Andrienko et al. 2008, Long and Nelson 2013).

The GIS&T community has been very successful in adopting a range of tools from related disciplines for this challenging task. First of all, data mining algorithms were deemed to be a natural fit, with borrowings from spatio-temporal association rule mining known from market basket analysis or time series analysis from stock exchange analysis. Then, movement data and its processing also led to significant developments in the database community, with moving object database (MOD) specifically being tailored for managing movement data and querying patterns. Furthermore, the computer science discipline of computational geometry produced a wide range of movement pattern approaches focusing mostly on the geometric aspects of arrangements of points and lines representing movement. Although the GIS&T community has produced some attempts aiming for a generic categorization of movement patterns, the diverse nature of the involved application areas keeps challenging such noble efforts (Dodge, Weibel, Lautenschütz, 2008).

Visualization and visual analytics is another GIS&T field that has enthusiastically adopted the challenge of CMA. With its natural affinity to large noisy spatio-temporal datasets, information visualization and exploratory data analysis are a natural fit for movement data (Andrienko and Andrienko, 2012, Demšar et al. 2015). The oft-cited ideal match between the human ability to perceive patterns and trends with the computer’s power to process and present large datasets also works well for CMA – adhering to Shneiderman’s mantra “overview first, zoom and filter, then details-on-demand.” Linked views and animation are especially prominent elements in the many visualization settings put forward for movement data. Typical views include maps, 3D space-time spaces, and parameter spaces typically depicting time series of derived movement parameters such as speed or acceleration. Also, the interactive visualization of previously mined movement patterns in map views – hence the combination of data mining and visualization promoted as visual analytics – works well for exploring large streams of movement data.