The near ubiquity of maps has created a population the is well adept at reading and understanding maps.  But, while maps are familiar, understanding how the human brain processes that information is less known.  Discussing the processing of geographic phenomena could take different avenues: specific geospatial thinking skills, general perception and cognition processes, or even different parts of the human brain that are invoked when thinking geographically.  This entry focuses on tracing the processing of geographic phenomena using a choropleth map case study, beginning from perception — the moment the phenomena enter the human brain via our senses, to cognition — how meaning and understanding are generated.

This topic is also available in the following edition:

As both perception and cognition are entire fields themselves, a complete explanation within the confines of this entry is not possible.  Instead, this entry provides a portal or way of thinking about these two fields through a specific case study – reading a choropleth map.  Using an example map as a backdrop, we address some of the perceptual and cognitive processes that are engaged by the reader for this case study.

While the two constructs of perception and cognition will be addressed below, let’s start with some brief definitions.  Perception enables the inbound reception of information about our surroundings and environments through our senses. Higher-level cognition enables us to make sense and create meaning from and across the inputs filtered through the lower-level perceptual process.

What happens when humans look at maps or think about their environments and surroundings? How does a person make sense of what they see and make interactive and locomotive decisions? These are questions that are of keen interest to researchers studying spatial cognition. To answer these questions, understandings from across the psychological, neuroscientific, and geospatial sciences, as well as philosophy, are augmented to help explain how humans perceive space and its representations. When you open your eyes every morning to see and observe the spaces around you, a myriad of mental processes kickstarts throughout your brain to enable you to see, recognize and identify the items and things and their basic shapes, forms, and attributes that make up your surroundings. This near-instantaneous process relies on both active and passive (unconscious) processes (Beck & Kastner, 2009). Much of this process centers on visual perception – that is the perceptive process that relates to visual inputs received by the eyes. However, it should be noted that spatial perception can also be achieved through other non-visual senses such as touch and sound. Nonetheless, they rely on a similar and overlapping mental process that evolved to allow us to recreate abstract mental representations of our environments (Brittell, 2018).

Thus, central to perception is the process of recognition and identification of information received through the senses. For example, when we look at the accompanying map, we recognize it as an abstract image representing space – i.e. a choropleth map (Figure 1). We identify the hues and lightness levels being used as part of its symbology. We identify the clustering of points. We identify the enclosed forms of polygons and recognize them as boundary units. We identify the hierarchy of the myriad of elements on the map. Much of these processes are explained through what is collectively understood by cartographers as Gestalt psychology (MacEachren, 1995). Gestalt psychology can roughly be explained as the perceptually optimal configuration of visual elements. It is a framework that helps explain many of the visual perceptual subprocesses that collectively enable this identification and recognition process. This theoretical framework is built upon classical observation of human perception where complete shapes and orderly forms are preferred, with the perceptual system working to identify and prioritize complete shapes while additionally constructing forms where there may be none. Note that while geo-visual understanding of perception is rooted in Gestalt psychology, recent trend in psychology research has attempted to move beyond the philosophical inference of Gestalt and replace it with concepts rooted in neuro-mechanical models (Jäkel, Singh, Wichmann, & Herzog, 2016; Poldrack & Wagner, 2004; Seymour, Karnath, & Himmelbach, 2008). Still, these theories are useful for conceptualizing these concepts. A major part of this process is through the perception of figure-ground relationships. Figure-ground explains the visual perceptual process that identifies what elements are in the foreground and are therefore more important, and what elements are part of the background and are less visually salient. 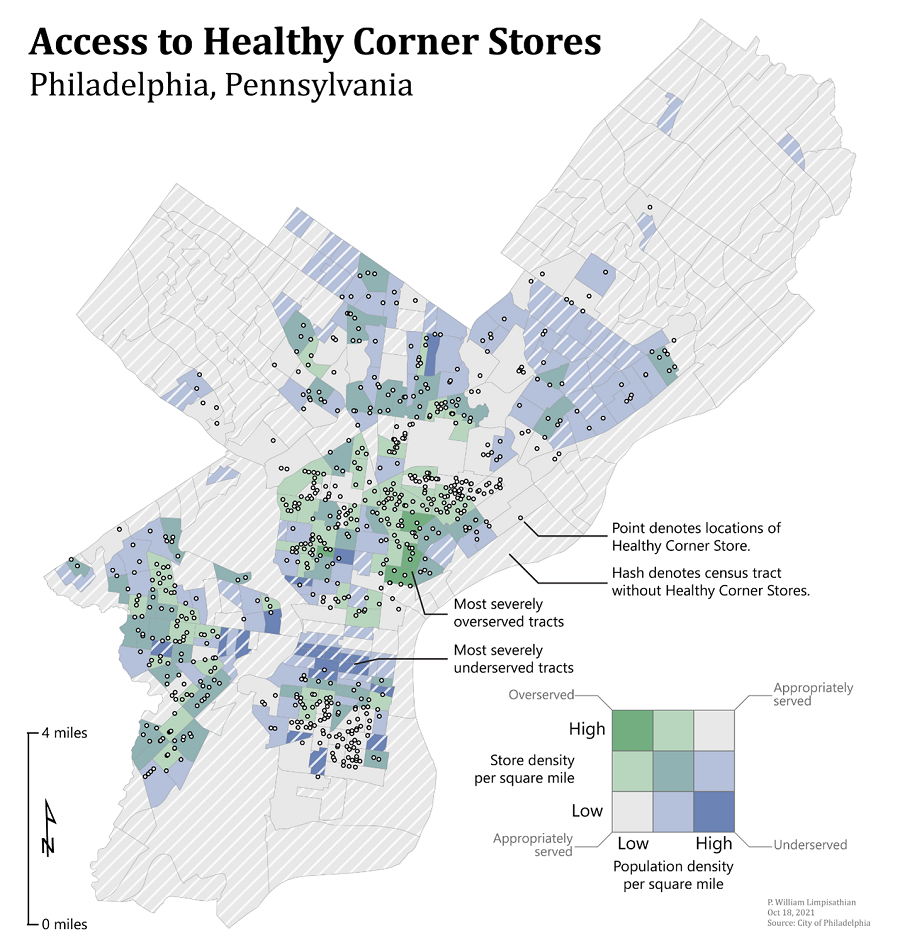 As such, when we look at this map, our perceptual system goes to work to make sense of the observed shapes and forms (Lloyd, 2005). At the initial level, dedicated cells along the visual cortex of your brain identifies basic forms and lines and how they fit together. This is the process of making connections and from those connections, we begin to perceive the basic points, shapes, and other forms on the page. Once the basic shapes and forms are mentally perceived, the perceptual processing systems attempt to make relationships between them based on their visual characteristics. In the case study here, the similar and interconnected shapes that form the census tract polygons are perceived as related and part of a larger whole, which themselves form the City of Philadelphia limit. Additionally, reflective of the discussed perceptual principles, we can also begin to see and perceive what is not there. For example, tract borders that are visually obscure by overlapping points are nonetheless perceived as uninterrupted enclosed border lines. In a similar vein, despite visually being on the same two-dimensional plane, the small corner store points are likewise perceived as a hierarchically higher set that is on top of the census tracts. Further, we perceive spatially near features, such as clusters of points, and similarly symbolized features, such as uniformly styled boundaries, as part of a grouped whole. Moreover, the green-to-blue gradient of the choropleth symbology is perceived as related or different based on the similarity of their hue and lightness. From this perceived hue and lightness difference, census tracts that are in the same class or are more similar in symbology are subsequently perceived as more related than tracts that are symbolized more differently.

But, the perceptual systems only distinguish differences between the objects based on variables such as form, hue, closure, etc.  To make sense of the magnitude differences or even the overall pattern, involves the cognitive systems (Fabrikant, Hespanha, & Hegarty, 2010).  Though, think of these systems as a continuum rather than separate categories.  While there are brain regions that are more involved in one system than the other, for example visual areas V2, V3 of the Visual Cortex involvement in perceptual processing and the Pre-Frontal Area or Hippocampus involvement in reasoning and cognitive processing, there’s not really a moment when processing leaps from the perceptual systems to the cognitive systems.

As discussed above, processing of geographic phenomena begins with perception or information input, which can come from two sources, either direct exploration of the environment or cartographic maps. Refer again to the map above.  You brain has distinguished between the shapes, forms, and hues.  But, one of the purposes of a choropleth map is to convey spatial patterns.  Now that our perceptual systems have distinguished between objects, our processing moves to higher order geospatial cognition.  It’s here that we first begin to derive the meaning associated with the symbols.  Invoking our understanding of magnitude differences, we determine that the darker blue represents higher levels of population density while darker green represents higher levels of store density.  Using processes of visual search, along with our new understanding of the value differences between the symbols, we can identify differences between discrete polygons on the map.  Continuing to summon our higher order processing skills, spatial grouping then allows us to identify on the map areas of similar values along the axes shown in the legend.  Through a synthesis of visual search, symbol meaning, magnitude, and spatial grouping, we now see the generalities and specificities in the spatial pattern.

Our goal in this entry for the Body of Knowledge was to tell a story of how our brains are making sense of the geographic phenomena – from the initial uptake of the information through our eyes (in this example), to eventually understanding the overall intent of the map: to relay the spatial patterns of disparity between underserved and overserved census tracts in Philadelphia.  Through a combination of perceptual and cognitive processing, we gain knowledge of geographic phenomena by connecting and identifying information through our senses (perception) and then cognizing meaning and understanding of that information.

Brittell, M. E. (2018). Neuro-Imaging Support for the Use of Audio to Represent Geospatial Location in Cartographic Design. University of Oregon, Eugene. Retrieved from https://www.proquest.com/docview/2186617933 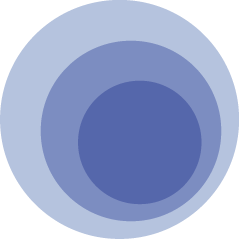