You are currently viewing an archived version of Topic Cartograms. If updates or revisions have been published you can find them at Cartograms.

cartogram: a diagrammatic map type that represents the mapped area by distorting the geometry of the feature itself

non-contiguous cartogram: adjacencies are compromised as areas shrink or grow; individual area shapes are preserved but they become detached from the overall map

contiguous cartogram: adjacencies are maintained but shape is distorted to accommodate the mapped variable

gridded cartogram: uses repeating shapes of the same or different size to create a tessellated representation of the mapped variable

2.1 The case for cartograms

It might sound paradoxical but geography can get in the way of making a good thematic map. The basis for most thematic maps is providing the reader with a map from which comparisons are clear and discernible. This might be achieved in many ways such as through normalizing absolute values by a common denominator for a choropleth map, to take account of the inherent differences in the size of each area.

Instead of changing the data and maintaining the geography, an alternative is to retain the data values but modify the geography. Consider the United States electoral system in which states with larger populations get more electoral votes. Yet, the more populous states are not necessarily the same as the largest states in area and so a map that shows the predominant result as either red or blue in the geographical sense inevitably skews our perception. We end up with an accurate, though somewhat misleading, map because densely populated states are relatively small and vice versa. People simply are not good at seeing through the mediated view of the data that the map technique delivers. While it’s possible to accommodate such issues using different design approaches for symbology, the alternative is to morph the geography itself. This is the basis for a cartogram – a diagrammatic form of map that distorts the geography to overcome some of the problems of heterogenous reality.

One of the disadvantages of the cartogram is that it inevitably changes the visual representation of geography. This has consequences as the map attempts to balance statistical accuracy, geographical accuracy and topological accuracy. In some respects any cartogram could be thought of as a unique map projection – one that is modified by the data variable being mapped. As with any map projection that tries to warp 3D space onto a 2D surface, some distortion is inevitable. Cartograms therefore contain inherent distortions as they strive to minimize the natural distortions caused by our perception of real geography.
1.2 Some Background to Cartograms
The French engineer Charles Minard is largely credited as the first to use the term cartogram (Friis, 1974). Minard was a pioneer of statistical graphs and charts in the mid-1800s. He is possibly most known for the map he created to plot the catastrophic march of Napoleon’s army on Moscow but he successfully integrated graphs with maps in many other ways. Many early statistical maps were also referred to as cartograms and the term was used interchangeably with many forms of thematic map until the early 1900s. While maps and atlases had begun to use cartograms of some types, perhaps the earliest example of its use in a general English-speaking publication was in The Washington Post in 1929. Joseph R. Grundy used a cartogram to illustrate his belief that State-based voting powers were unfair as they all had markedly different populations. Hence, voting strength would also be different and the map was an attempt to show the sizes of each State on the basis of population and Federal Taxes. A 1903 publication from Germany (Kartogramm zur Reichstagswahl: zwei Wahlkarten des Deutschen Reiches in alter und neuer Darstellung mit politisch-statistischen Begleitworten und kartographischen Erläuterungen by H. Haack und H. Wiechel) pre-dates Grundy’s cartogram. It was publicly on sale at newsagents in Germany targeted at a general audience and consists of a highly detailed electoral cartogram of the general election in the German Empire at the time.
In the early 1930s Raisz also noted the difficulty in accurately defining cartogram due to its use as a general term for many thematic maps. He also illustrated his text books with examples of a land-equal area cartogram. He used rectangles representing geographical divisions of the Census and States proportional to their population. These value-by-area cartograms became relatively well defined through their inclusion in textbooks by Dent (2008) and Slocum (2008). The 1990s also saw further development through the work of Danny Dorling whose abstract non-contiguous cartograms became a popular way to show data by throwing the shackles off geography altogether. Michael Gastner and Mark Newman created an algorithm that managed the two seemingly impossible objectives of warping geography by a data variable while at the same time managing to maintain shape to a reasonable degree (Gastner and Newman, 2004). Their density-equalizing contiguous cartogram technique provided a way to maintain the topological principle of adjacency while keeping some of the shape of the original unit areas.
The development of cartograms since the early 2000s has progressed as improvements have been made in the various algorithms. Hennig adapted the Gastner-Newman algorithm to incorporate intra-area warping. This allowed areas to be warped in a way that caters for their heterogeneity. More recently, cartograms have appeared with increasing frequency in the mainstream media. For instance, Gridded cartograms have become popular graphical ways to report election results. They tessellate shapes, for instance squares or hexagons, of uniform size to create abstract illustrations where some other visual variable is used to symbolize the data variable itself, for instance through shading each shape much like a choropleth map. Though it is not guaranteed, many gridded cartograms are actually contiguous (adjacencies between all pairs of enumeration units are preserved). However, they are not continuous as an explicit transformation is not defined for all points (Kronenfeld, 2017).
Tobler (2004) and Nusrat and Kobourov (2016) provide excellent and detailed reviews of the history of cartograms.
3.0 Types of Cartogram
3.1 Non-contiguous cartogram
Non-contiguous cartograms are the simplest type where the shapes of the enumeration units are simply resized according to the denominator used (Olson, 1976). Typically this results in an over-lapping or non over-lapping map (Figure 1). In a non-contiguous cartogram topology (adjacency and connectivity) is sacrificed to preserve shape and enable recognition of geographical areas. Non-contiguous cartograms are essentially proportional symbol maps where the area of each geographical unit is scaled proportionate to the data value. While the recognition of individual shapes can be maintained, position warps location and distorts the overall appearance of the map as a whole. 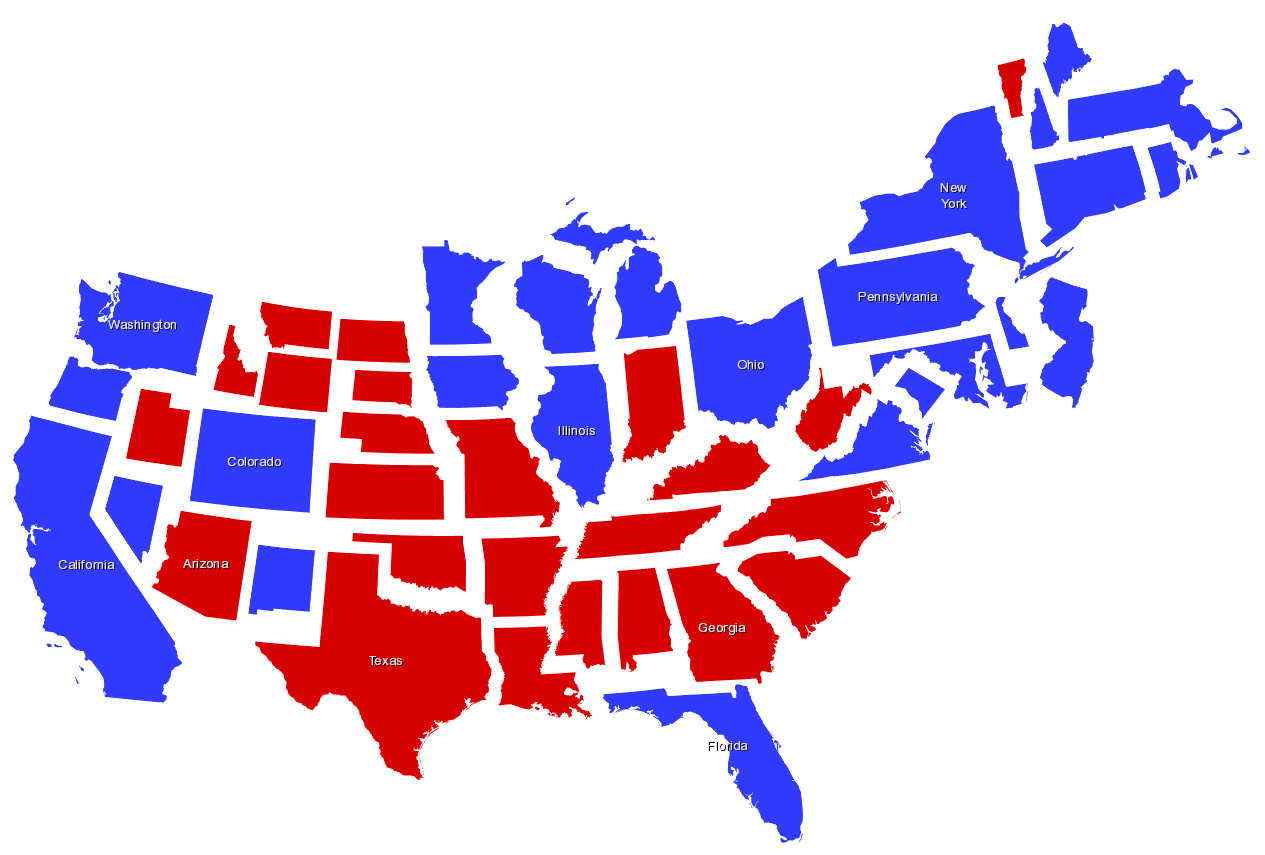 Figure 1. 2012 U.S. Presidential election results as a non-overlapping non-contiguous cartogram
3.2 Contiguous cartograms
Contiguous cartograms maintain connectivity between adjacent geographical areas but have a tendency to dramatically distort shape. Perhaps the most widely used is the Gastner-Newman cartogram (otherwise known as a population-density equalizing cartogram; Gastner and Newman, 2004) which does an excellent job of retaining some character of the general shape of individual areas (Figure 2). However, the degree of distortion often renders the map difficult to interpret due to the abandonment of familiarity. Of course, they are attention grabbing and if used in a web map, data could still be retrieved through a hover or popup which can counter the visual jarring. 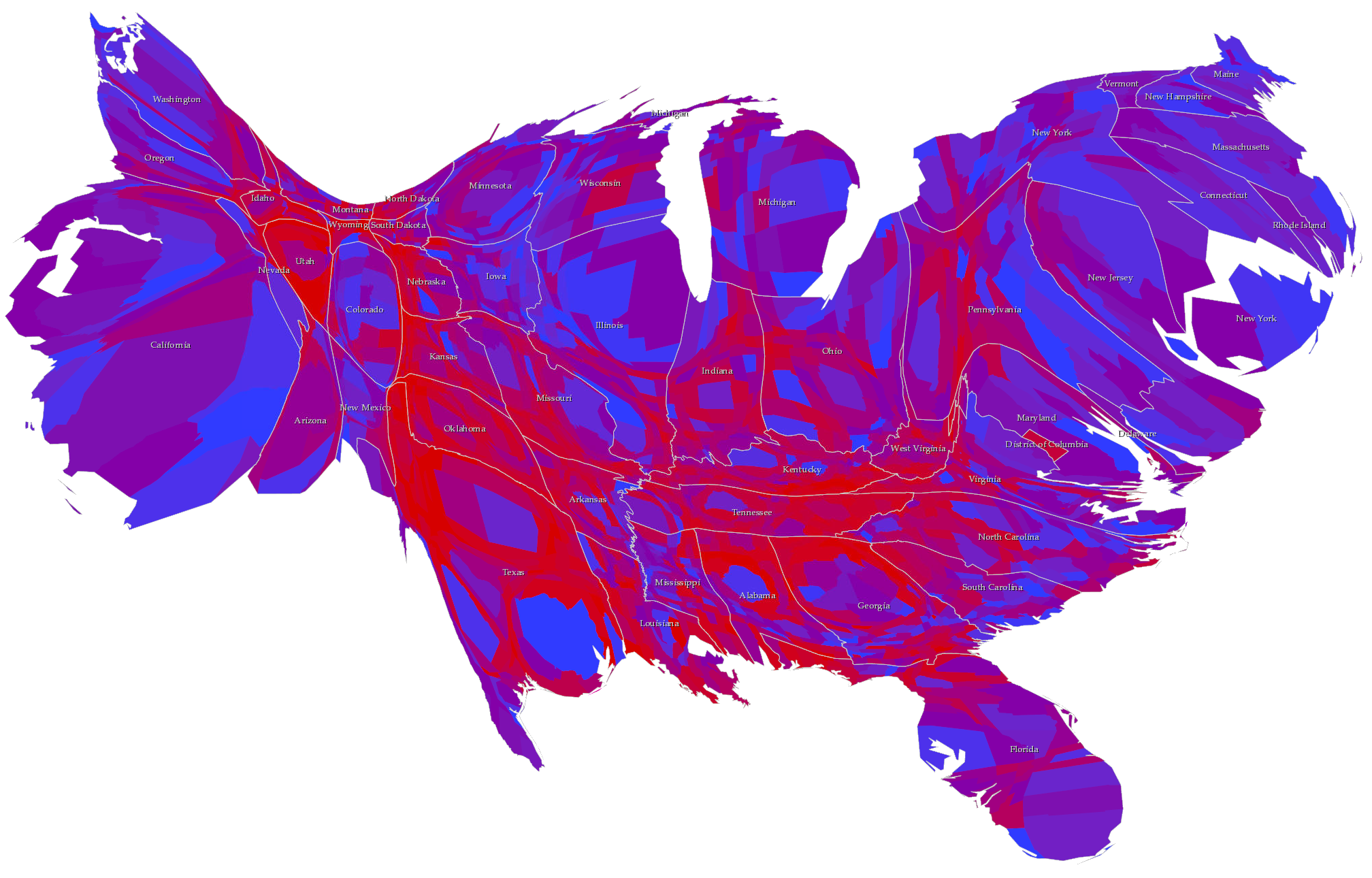 Figure 2. 2012 U.S. Presidential election results as a population-density equalizing cartogram
3.3 Graphical cartograms
Graphical cartograms are a third type which effectively create proportional symbols for the data values and then reorganize them in some way. The Dorling cartogram is perhaps the most well-known, which uses proportional circles, organized to provide the best adjacency as possible (Figure 3; Dorling, 1996)). An alternative is the Demers cartogram which uses squares instead of circles and thus reduces the gaps between shapes (Figure 4; Bortins et al., 2002). However, whereas the Dorling cartogram attempts to limit the distance of the eventual position of each object from its original position, the Demers sacrifices distance to maintain contiguity as far as possible. 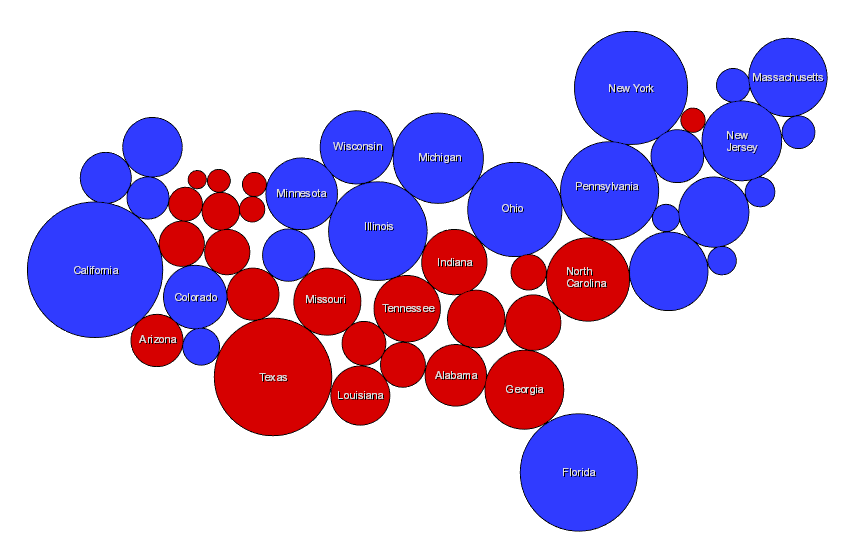 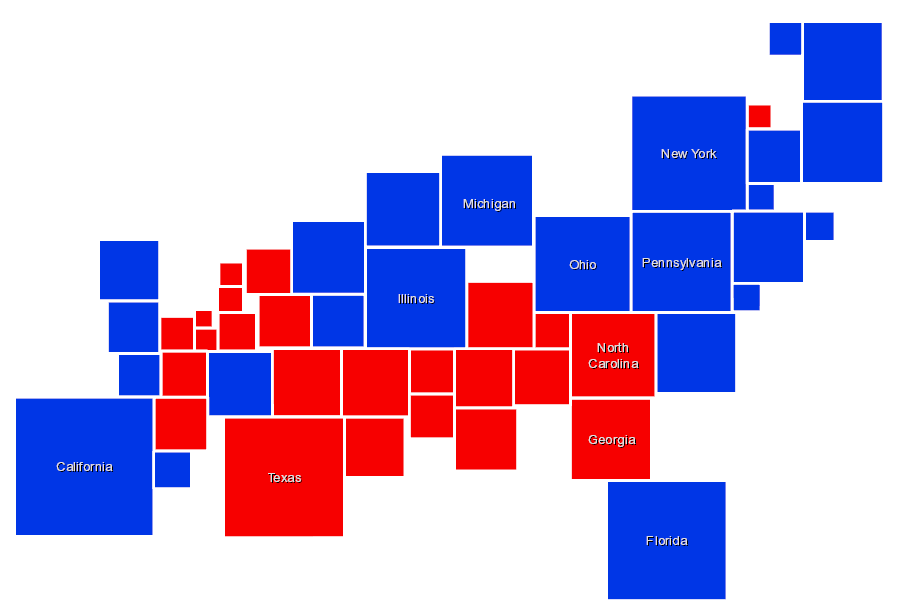 Figure 4. U.S. Presidential election results as a Demers cartogram.
3.4 Gridded cartograms
The gridded (or tessellating mosaic) cartogram is a compromise cartogram that ignores geographical shape but attempts to maintain a more uniform topology that enables people to find familiar places without the need for perfect maintenance of adjacencies (Cano et al., 2015). Squares and hexagons tend to be the preferred shape for gridded cartograms. In a gridded cartogram, each area is symbolized by the same-sized shape regardless of geographical reality. Different symbol fills can be used to show higher or lower values of the data variable being mapped, using the same processes for classification and symbolization as a choropleth map (Figures 5 and 6). Because the shapes used are uniform in size, they can also provide a framework for incorporating graphs to create gridded cartogram of small multiples (Figure 7). 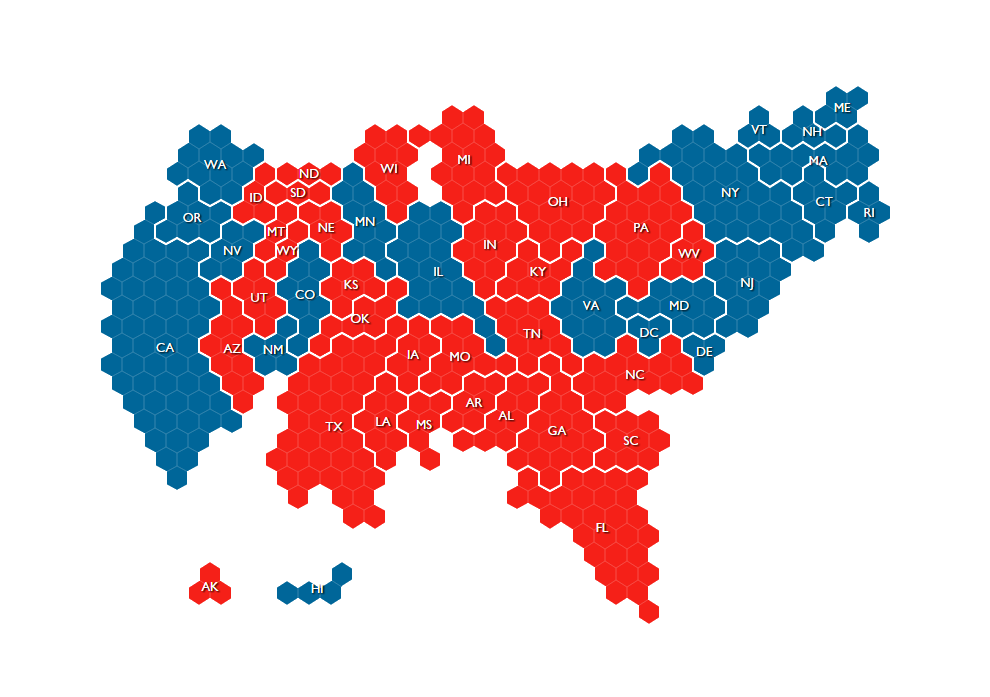 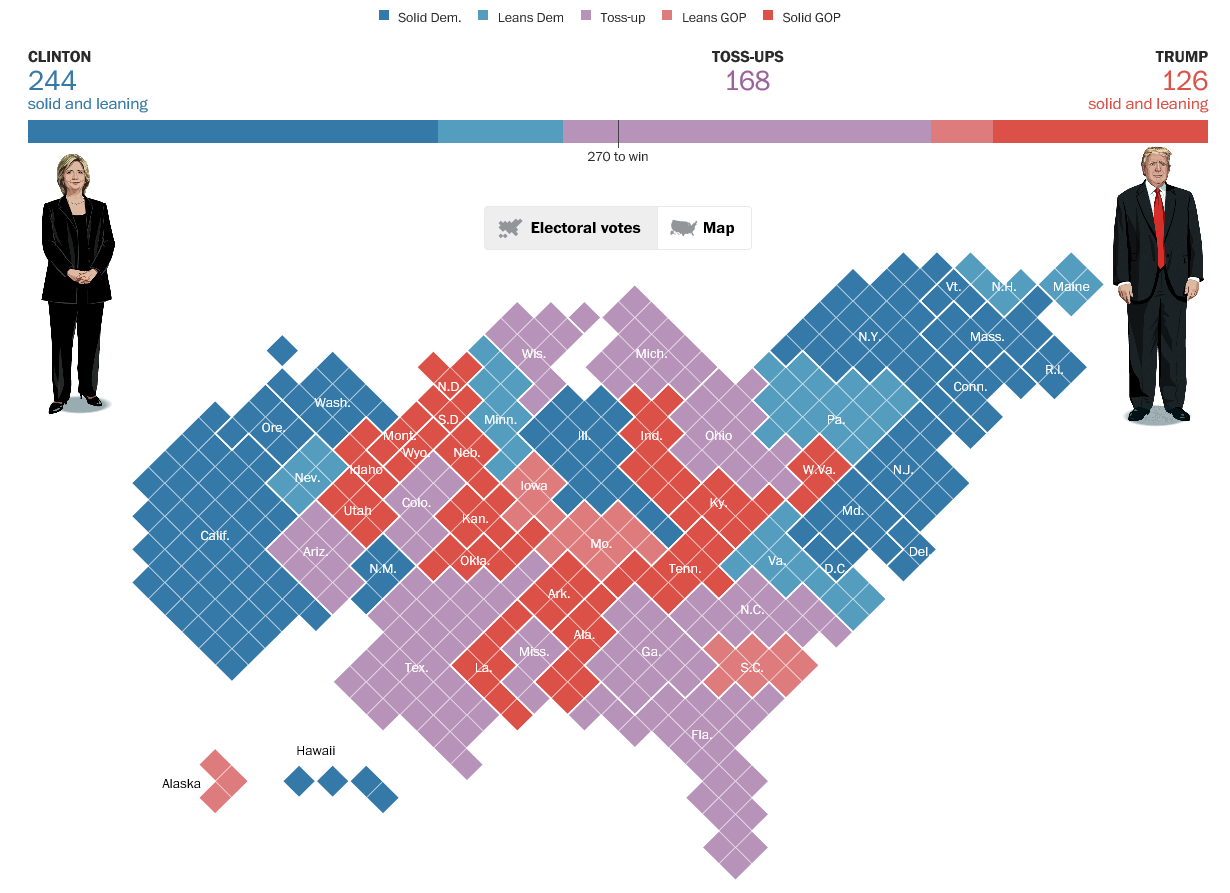 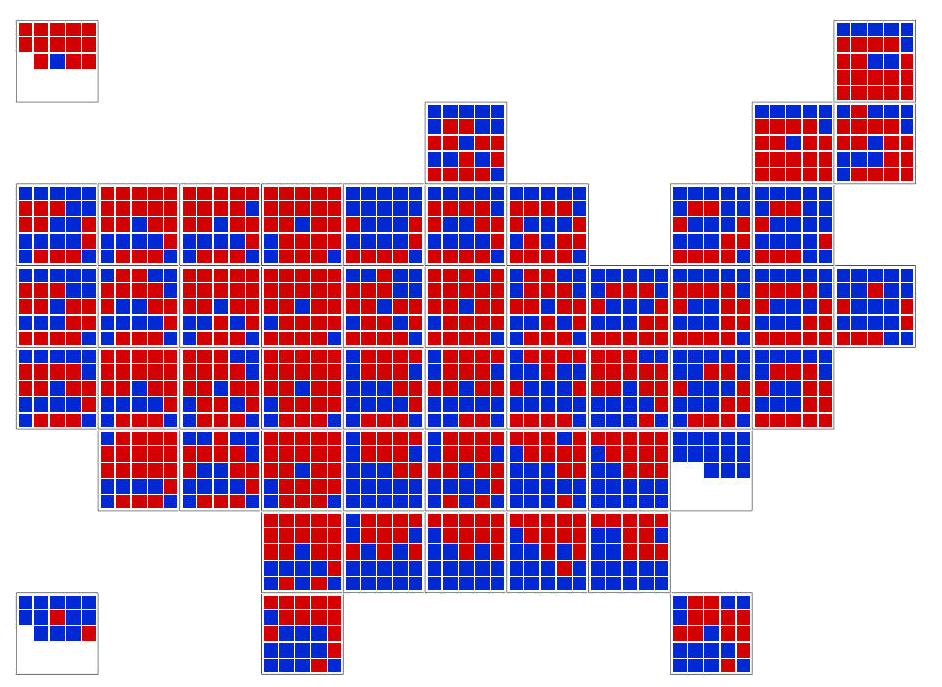