This entry was first published on August 14, 2020. No earlier editions exist.

Georeferencing: the recording of the absolute location of a data point or data points

Georectification: the removal of geometric distortions between sets of data points

Georeferencing, or the recording of the absolute location of a data point or data points, and georectification, or the removal of geometric distortions between sets of data points, are often conflated in conversation. This is likely due in part to the fact that they are often completed in simultaneous processes and that georectification directly affects the positional accuracy of pixels within georeferenced remote sensing data. Georeferencing is a requisite task for all spatial data, as spatial data cannot be positioned in space or evaluated with respect to other data that are without being assigned a spatial coordinate within a defined coordinate system (e.g., projections). Georectification does not require the location of points with space; only adjustment of the relative position of those points to on-another. Georeferencing is a pre-requisite for use of data in geographic information systems (GIS), while georectification is a process most commonly applied to remote sensing imagery to improve the accuracy of georeferencing by removing terrain, platform, and sensor induced distortions.

Many data are implicitly georeferenced (i.e., are labeled with spatial reference information), such as points collected from a global navigation satellite system (GNSS, e.g., GPS). Data that are not labeled with spatial reference information can be georeferenced using a number of approaches, including empirical warping, direct projection, or bundle block adjustment. 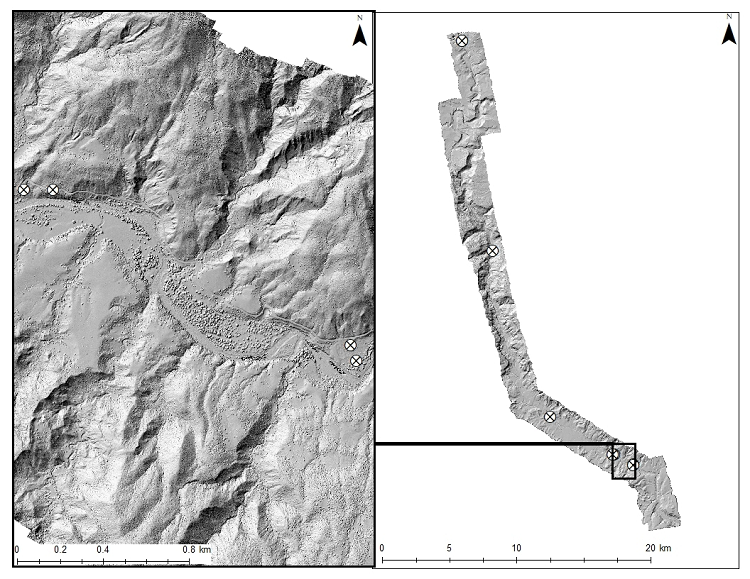 Empirical warping can be conducted with a variety of models, including polynomial, rubber sheeting, and spline functions (See Toutin, 2004 for details). Polynomial warping is the most common empirical warping approach due to its computational efficiency and resilience to outliers. First, second, and third order polynomial warping allow for increasing model flexibility, respectively, with first order allowing only scale, rotation, and skew adjustments. The higher order polynomial adopted the more GCPs are required to calibrate the model. Mathematically, first order requires a minimum of 3 points to fit a model, second order requires 6, and third order requires a minimum of 9 GCPs. In practice, the minimum number of points recommended is at least twice this number because only GCPs beyond this minimum number allow for evaluation of model fit, which is typically measured by the root mean squared error (RMSE) between known (i.e., input at GCPs) locations and the locations estimated by the model.

The three orders of polynomial warping are often conflated with a related process, resampling. Georeferencing processes simply estimate the location of each data point. When georeferencing vector data, each point’s location can be estimated. When georeferencing raster data (e.g., aerial photography, satellite imagery, scanned maps), however, the location of the new estimated grid does not align with the grid prior to warping, requiring the reallocation of cell values to the new grid. This is completed using one of three resampling methods: Nearest neighbor, bi-linear, or cubic convolution. Nearest neighbor simply adopts the value of the cell from the raster prior to warping to the most overlapping cell in the warped grid. This means that original raster values are maintained, making it the preferred method for remote sensing data that will be used for further analytical tasks or for categorical raster data where integer class values must be maintained. The limitation of nearest neighbor resampling is the “stair-step” effect that can result along linear features and boundaries. Bilinear and cubic convolution, which average values from 4 and 16 neighboring cells, respectively, minimize apparent distortions due to warping, and are therefore preferable for georeferencing imagery for display and visual interpretation purposes.

When empirical warping is conducted on remote sensing imagery, georectification is implicitly taking place if the reference source is orthographically corrected, but that georectification is purely empirical and dependent on the flexibility of the warping function employed and number and location of GCPs employed. Direct projection and bundle block adjustment based georeferencing employ direct measurement of factors introducing geometric distortions (i.e., internal sensor geometry, platform attitude, terrain) and, therefore, rectify input imagery inherently. The Manual of Photogrammetry, published by the American Society for Photogrammetry and Remote Sensing, serves as a definitive reference on the topic (McGlone, Lee, & American Society for Photogrammetry and Remote Sensing, 2013). Photogrammetry refers to the practice of mensuration from image data, and is thus primarily concerned with the positional accuracy of image data.

Direct projection employs a sensor model (i.e., estimate of the geometric relationship between the detector/film and the scene being captured) to project the location of measurements from the sensor location to a ground plane, requiring information on the location and attitude of the platform from platform inertial information (e.g., GNSS, accelerometers, gyros) and information on the terrain of the surface being projected onto. The accuracy of the georeferencing and georectification, in this case, is directly dependent on the accuracy and precision of the sensor model, platform attitude information, and terrain model employed in the process. Frames of remote sensing data are projected independently, resulting in errors on the georeferencing/georectification being apparent between individual frames. The advantage of direct projection is that it requires no human intervention and is extremely computationally efficient, making it a preferred method for time-sensitive applications of remote sensing. The key disadvantage is the requirement of precise measures of sensor geometry and platform attitude, which is expensive and requires a priori configuration of the sensor system.

Bundle block adjustment routines directly employ or estimate sensor models, platform attitude information, and terrain information to estimate a single model of the geometry of multiple frames of remote sensing data, constraining and distributing geometric errors across the frames. A key step to this process is the identification of tie-points that define corollary points between frames, which when coupled with GCPs creates a single geometry model that can distribute errors through least squares estimation. Bundle-block adjustment and related approaches are the most rigorous option for georectification and are employed in the creation of most orthophotos. Bundle block adjustment is the primary technique employed in soft copy photogrammetry, which today includes a continuum from traditional approaches requiring manual identification of tie-points and GCPs to completely automated approaches (e.g., Structure-from-motion and MultiView Stereo, SFM-MVS). Automated bundle block adjustment approaches like SFM-MVS can generate sufficient numbers of tie-points that the height of terrain can be directly estimated from the differential parallax, measured as differential relief displacement between image frames, negating the need for use of external terrain information (e.g., Zhang, Lippitt, Bogus, Loerch, & Sturm, 2016). The terrain model in Figure 1 was extracted using SFM-MVS based photogrammetric approach, producing the vertical and horizontal errors show in the check points shown in Table 1.

Regardless of the georeferencing approach, the quantification of errors in that georeferencing is a critical step. RMSE in the horizontal (X&Y) and vertical (Z) can be calculated between known (e.g., survey) locations and modeled locations (See Table 1). These pairs are referred to as check points (CPs) and each have residuals in the horizontal and, in 3-dimensional data, vertical. Figure 2 shows residuals for the CPs depicted in Table 1. CPs are similar to GCPs, comparing known field locations to image locations, but are distinct in that they compare field locations to modeled locations after georeferencing is complete. CPs must be independent of the model calibration process (i.e., not used as GCPs). The American Society for Photogrammetry and Remote Sensing (ASPRS) Manual Photogrammetry (McGlone et al., 2013) provides best practices for validation. General positional accuracy guidelines for moderate-course spatial resolution satellite image data is a check point RMSE of 0.5 pixels, while airborne data can vary from 1-3 pixels. Vector data guidelines vary widely, but accuracy standards should be driven by the intended use of the data being georeferenced. Satellite and aerial image providers routinely produce imagery with variable levels of geometric accuracy, each produced with versions of the techniques described here, providing higher levels of geometric accuracy produced using more sophisticated georeferencing and georectification techniques at greater cost. 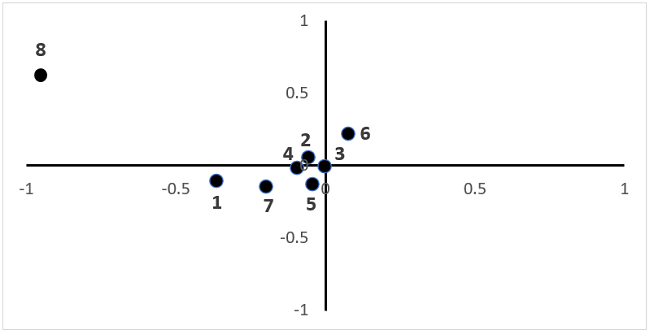