The latest version of the entry "Modelling Accessibility" may be cited as:

network: A collection of nodes, and links between nodes, that describe discrete movement opportunities in space. Often networks will have costs (weights) which describe the speed of travel along an edge, or constraints to movement at a node. Network analysis is one of the core areas of GIS&T analysis.

isochrone: A line of equal time travel used to map how far one can travel in a given amount of time from a particular focal location.

constraints: Features of the environment or individual that limit or completely block potential movement opportunities.

2. Measures of Geographical Space and Distance

The first key question faced when modelling accessibility is how to represent the geographical space within which movement occurs. There are two fundamental representations of space commonly used in GIS&T, continuous space and network space (Figure 1). Continuous space represents the simplest and most common way to represent geographical space, and is done using a polar or Euclidean geometry. Spatial networks are more complex, and represent a discrete set of movement possibilities. Spatial networks are defined by a set of interconnected nodes and links between nodes that represent where movement is possible along the network. Within a spatial network many constraints may limit our movement, for example the presence of one-way streets or turn-limited intersections. 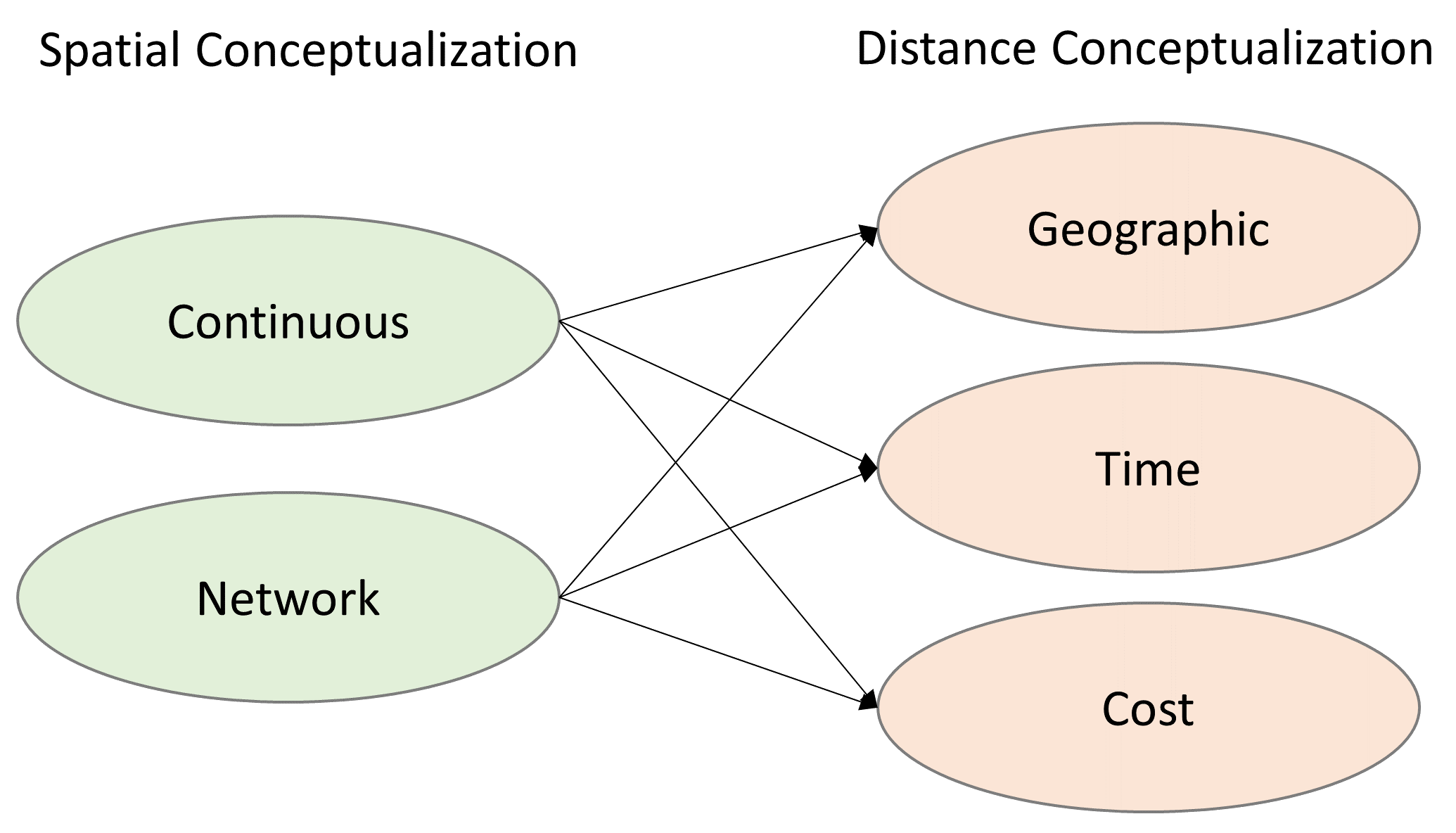 Figure 1. Different spatial and distance conceptualizations that are commonly employed when measuring and modelling accessibility.

Geographic distance is defined as the linear measurement in geographical distance units (e.g., meters, kilometres, or miles) between two locations. For continuous space, geographical distance can be quantified using the Euclidean or Manhattan distance metric between two points. Euclidean distance measurements are incredibly powerful as they are easily and efficiently calculated using modern computing tools, and thus can be readily incorporated into analysis. However, most human movement occurs along a spatial network consisting of roads, railways, and paths. In fact, Euclidean distances are generally poorly suited to accurately measure distance across such complex spaces. For these types of network space, the geographical distance is defined as the summation of the edge distances that must be navigated to go between two points along the network. Finally, many applications consider measures of distance across a heterogeneous spatial field. In such cases, it is typical to compute a least cost path, which is the path between two locations that minimizes the impedances as defined by the spatial field. Least cost path models of accessibility are incredibly powerful way to study wildlife movement, but are also routinely used in siting new transportation routes and other pieces of linear infrastructure.

Time distances (or simply travel time) can be calculated where additional  information is provided  on how to translate geographical distances into time. The calculations of time distances will typically be highly dependent on a mode of travel (e.g., walking vs driving). The calculation of travel times between locations is one of the core functions associated with GIS-based network analysis and is heavily embedded in modern navigation applications (e.g., Google Maps). Similarly, following the framework outlined by Miller and Bridwell (2009), the time associated with least-cost paths can be readily calculated in a GIS.

Finally, cost distances are the most generalizable form of distance, as both geographic distance and time distance are special cases of a cost distance. A cost distance is used to describe the cumulative impedance (i.e., the cost) along a route from location A to B. Computing cost distances requires a further set of information regarding the nature of the impedances which can be readily constructed for both continuous and network definitions of space in a GIS. Cost distances might relate to, for example, the energy consumption required to traverse a route by an electric car, the calories burned by a cyclist, or the financial cost of various forms of public transportation. Costs may also relate to less tangible elements of travel, for example, Alivand et al. (2015) evaluated how route-choice in the state of California is influenced by scenery.

A second class of more complex measures of accessibility are known as gravity or distance-decay measures. Under this class of model, destinations are weighted by their relative distance from the individual, for example destinations that are closer are given a higher weight than destinations further away. Characteristics of the destinations can be also be considered as an additional weighting factor in the measure. For example, the floor area of a store is commonly used as a measure of its attractiveness to potential shoppers. In their general form gravity-based measures of accessibility take the form:

Where Ai is the measure of accessibility for individual i, and vj is the (optional) weighting for the characteristics of the destination dij is the distance between the individual i and destination j, and f is a function for weighting the distance. Many potential functions could be used for f(dij), but typically choices are based on inverse distance or negative exponential functions. A criticism of gravity-based accessibility measures is that they can be difficult to interpret, for example there is no clear definition of what a high or low value should be, all analysis must be relative.

With time geography, Hägerstrand also formalized a set of additional constraints that should be considered when modelling accessibility:

Often it is useful to summarize the accessibility of regions (e.g., census blocs or counties) to generalize (and map) a measure of accessibility across the population. Aggregating accessibility measures can be done in a number of ways depending on the analysis needs and form of data in hand. The first, and simplest approach, is to choose a single representative location of the region and to compute the accessibility measure for that single location. Commonly the centroid of the region is taken, however there are many other potential ways this can be done, for example the population-weighted centroid. Another approach is to choose a number of locations within the region (either sampled randomly or based on existing data) and compute the measure of accessibility for each one; using a measure of central tendency to summarize for the region. This method is preferable when the existing data is present as it will reflect the real accessibility outcomes of the individuals, but also provide a range of potential accessibility scores which can be further analysed (i.e., do some regions have more or less variation in accessibility?). Other approaches take a more pragmatic approach, focusing on summarizing the accessibility of critical locations within a region (e.g., bus stops or ride share locations). All aggregation measures suffer from common issues associated with the aggregation process notably the ecological fallacy and its geographical sibling the modifiable areal unit problem (Openshaw, 1984). Thus, care must be taken to understand the effects and limitations associated with the chosen aggregation process when using aggregate measures of spatial accessibility.

The underpinning reason for measuring and modelling accessibility is that we think it might influence some other process that we are observing. It is not surprising that variability in accessibility can arise between geographical locations or sub-groups of the population. For example, using GIS to construct a space-time measure of accessibility Kwan (1999) found that accessibility to urban opportunities (e.g., shopping, food, entertainment, recreation) was significantly lower for women compared to men in a travel survey conducted in Columbus, Ohio. The reason for this variation however can be difficult to understand, owing to the fact that accessibility is a function of the spatial-temporal characteristics of both the origin (individual or region) and destinations. Thus, the presence of unequal access may be attributed to individual (or origin) effects and destination effects. Solutions for making access more equitable can thus focus on either of the origin or destination. Origin driven solutions attempt to improve the movement opportunities of individuals (or regions), for example by improving public transit options. Destination driven solutions attempt to improve the provision of destinations, for example by adding or changing locations.