unit of learning (UoL): the UoL is the major entity those characteristics or attributes are learned.

data input: data for rule learning is typically in the format of a table (singular relational format) or multiple related tables (multiple relational format). The rows in the table(s) are records that represent the instances of the UoL. The columns are the UoL’s attributes which take on values in various formats (e.g., Boolean, numeric, categories).

predicates: predicates are the basic building blocks of rules, used to express an attribute-value test for the UoL. Predicates can be a simple test (e.g., population = large) or a test of a more complex relationship (e.g., close-to “high_income_neighborhood”). The set of all predicates, P, is constructed from the data records, attributes, and attribute values.

Spatial predicates are distinguished from non-spatial (semantic) predicates, as they contain spatial attributes. These attributes relate to the spatial feature characteristics (i.e. location and shape) or the spatial relations among the features. The predicate close-to “high-income-neighborhood” mentioned above is spatial as it is distance-based.

Classical rule learning in data mining was originally designed to mine patterns in relational data. In this case, the unit of learning (UoL) includes records with aspatial attributes or shopping transactions. Rules describing co-occurrences of attribute values or of shopping items (expressed as predicates) are of interest. Classical rule learning problems are broadly categorized into descriptive and predictive, although the separation is not distinctive. One major difference is that data used for predictive learning contains a designated class attribute, while descriptive data does not. Predictive tasks aim to learn the classification rules, whose heads contain the designed class attribute and collectively form a set of these rules as an induced model, based on a training dataset to classify a set of new records. Descriptive tasks aim to extract rules without a designed class attribute.

The most popular descriptive rule learning approach is association rule learning (ARL) (Zhang & Zhang, 2002).  The process of ARL can be decomposed into two sub-processes: 1) to determine the predicate sets whose occurrences exceed a predefined threshold in the database (i.e., frequent predicate sets) and 2) to generate rules from the frequent predicate sets. Since the second sub-problem is quite straightforward, the research has primarily focused on the first sub-problem. The solution to this problem involves generating candidate sets and checking for frequent sets. The APRIORI algorithm is the most popular one because of its efficiency during the candidate generation process with pruning techniques to avoid measuring unnecessary item sets, while guaranteeing completeness. The algorithm, however, requires multiple scans of the database. Many of its successors thus focus on advancing the phase of finding frequent predicate sets while overcoming the multiple scan requirement (see Zhang & Zhang, 2002 for a comprehensive overview).

The key idea of the algorithm is to generate all predicate sets with a minimum occurrence threshold using an exhaustive level-wise search. A support and confidence measure framework is used to decide if a set of predicates is frequent and a rule is significant or not. The support of rule

The algorithm generates all frequent predicate sets of size 1 (i.e., containing one predicate), then of size 2, size 3, etc., until frequent sets of size k are no longer found. Candidate generation is performed with multiple passes over the dataset. In a pass, the algorithm counts the candidate item sets by using only the item sets found frequently in the previous pass. The function to find the frequent set of the APRIORI algorithm is as follows: 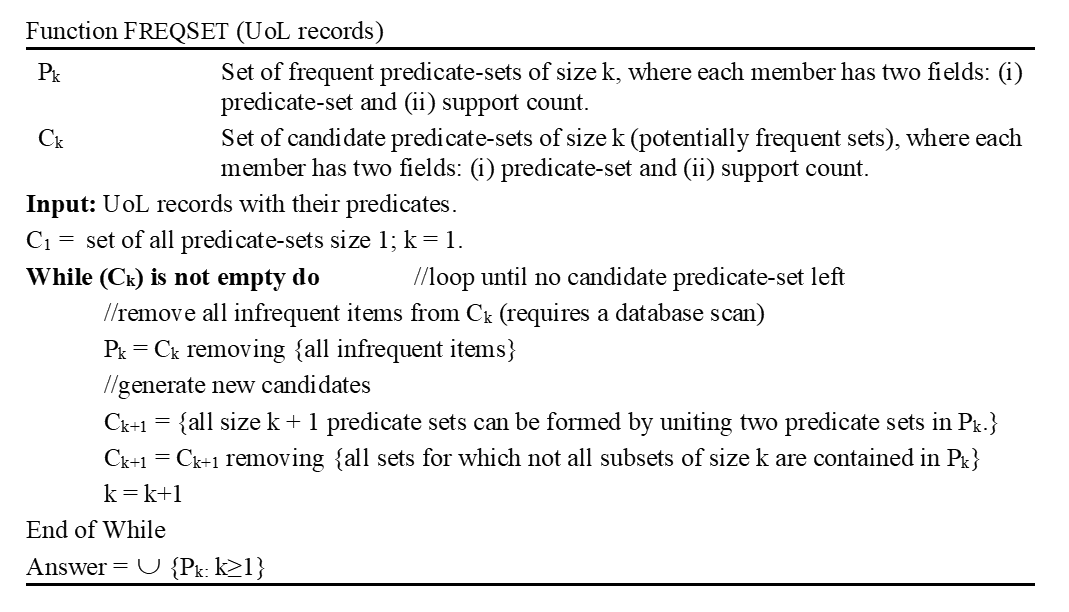 Rule learning is a promising technique for mining patterns of correlations with spatial big data. Rule learning for spatial data will be referred to as spatial rule learning.

Spatial data includes spatial features that are georeferenced (i.e., their locations are determined within a geographic coordinate system). Thus, spatial data possesses spatial attributes embedded in feature locations on or near the Earth’s surface. The nature of the geographic space, the complexity of the spatial object relationships, and the heterogeneous and sometimes ill-structured nature of geographic data, brings uniqueness to spatial rule learning. At the same time, it renders the standard rule learning techniques inefficient. Special characteristics of spatial information to be considered for spatial rule learning include:

Evolving from classical rule learning techniques, the objective of spatial rule learning is then to extract the frequent occurrence of both semantic and spatial attributes of analyzed spatial features or of object locations (co-locations). Spatial predicates expressing spatial characteristics and relationships of the learning units are often used in addition to non-spatial predicates when applying the APRIORI algorithm. The process of materializing all possible spatial characteristics and relationships to generate a complete set of spatial predicates become crucial. This task is, however, non-trivial. The achievements and remaining challenges in spatial rule learning can be broadly discussed under two learning problems: 1) spatial association rules and 2) co-location rules.

SAR learning is a powerful technique that uses predicates to express the aspatial and spatial characteristics of analyzed features, as well as the spatial effects and spatial interactions among them,.

Formally, a SAR problem could be stated as: Let D be a spatial database containing spatial objects O. Let P be a set of all possible predicates, both non-spatial and spatial, that could be derived from D. Each object O has a unique identifier. Object O possesses a set of some predicates in P, representing the semantic or spatial properties of O. A spatial association rule is an implication of the form X→Y, where X∈P, Y∈P, X∩Y≠∅, and ∃(x∈X or y∈Y)|x,y are the spatial predicate. The rule X→Y holds in D with confidence c if c% of the objects in D that contain X also contain Y. The rule X→Y has support in D if s% of the objects in D contain both X and Y.

An example of using SAR learning is to mine associations to crime activity using block groups as the unit of learning. The data table to mine (Figure 1) contains rows being block groups with columns which contain block group IDs, non-spatial aggregated demographic variables (e.g., employment, crime incident counts, business store counts).  Complex spatial attributes can be generated presenting the distance-based spillover effects of certain neighborhoods (e.g., neighborhood of high employment, around a shopping mall, etc). Continuous attribute values can be classified into nominal categories by discretization or fuzzy mapping techniques.

By handling complex spatial predicates properly, multidimensional correlations reflecting explicit and implicit spatial functional relations, as well as the compounding or mitigating effects of the semantic and spatial attributes, can be revealed through SAR learning (Dao & Thill, 2016).

SAR mining system representative achievements include GeoMiner (Koperski & Han, 1995), SPIN! (May & Savinov, 2003), SPADA (Lisi & Malerba, 2002), and SpatialARMED (Dao & Thill, 2016). SPIN! and SPADA, in particular, were developed to mine rules out of a multiple relational (i.e., many tables) database to deal with the issue of granularity with a multi-level concept hierarchical structure often encountered in spatial data.

One major challenge for SAR mining is to materialize all possible spatial relationships and present them using the form of predicates with meaningful linguistic values to facilitate the learning process. Many SAR learning systems (e.g., SPIN!, SPADA) have handled these challenges with an efficient indexing mechanism to extract non-complex spatial relationships (i.e., geometrical, topological, directional), while assuming a readily available complex concept hierarchy and relationships. SpatialARMED, in particular, facilitates the construction of complex spatial predicates posed by spatial effects and interactions (Figure 1) within and among neighborhoods. In this case, neighborhoods are defined as concentrations of high or low or homogeneous values regarding a certain attribute and detected using data-driven clustering techniques (see Dao & Thill, 2016; Dao & Thill, 2017 for details).

Fuzziness in the spatial concept hierarchy or relationship (e.g., near or far, large or small, strong or weak influence, high or low concentration) is another issue for SAR mining. It needs careful predication to derive meaningful predicate values and increase the chances of finding interesting rules (Laube et al., 2008). Efforts have also been made in handling spatial heterogeneity for SAR mining, including using subgroups and regional SAR mining. Here, the rule search space is divided into groups or regions based on a moving window in a similar manner to weighted regression (Li, 2008) or cluster analysis (Ding et al., 2011). 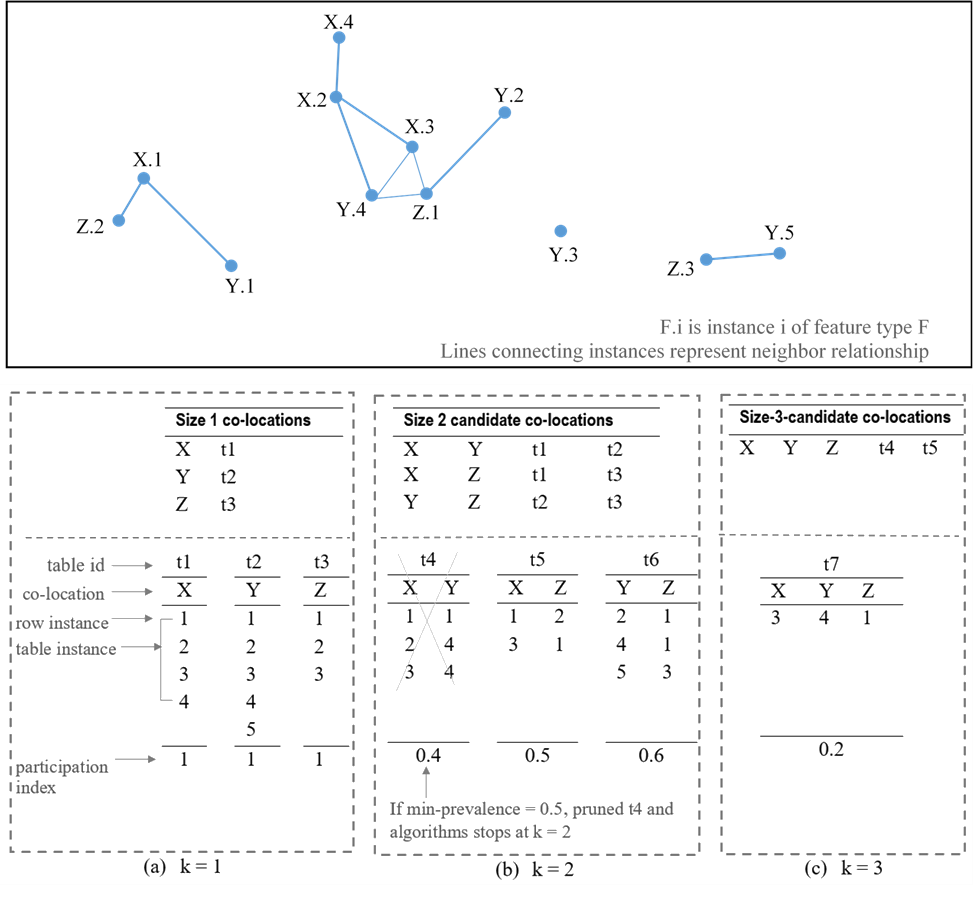 Co-location rule learning utilizes the concept of neighborhood and APRIORI-like algorithms to mine sets of spatial features located near each other. A difference from spatial ARL is that there is a concept of co-location, instead of frequency. The support and confidence framework can no longer be applied. Instead, a neighborhood definition, along with the so-called prevalence measure (i.e., participation index), are used to decide whether the set of spatial features are co-located or not. In particular, when generating a set of candidate co-locations size k + 1 from co-locations size k, only the combination of features whose instances have neighborhood relationships are considered. After generating all candidate co-location sets of size k + 1, their prevalence measures are calculated and used to seek significant co-location. The participation ratio pr(c,fi) for feature type fi in a size-k co-location c = {f1, …, fk} is the fraction of instances of feature fi neighborhood-reachable to instances of other feature types in c. The participation index of the co-location c is the minimum participant ratio of feature types involved in c.