For many years, collaboration has been a key cornerstone in the success of efforts achieved by the geospatial community.  When paired with governance, collaborative efforts often lead to sustainability and have the effect of broadening the benefits that can be achieved.  The following text shares how the geospatial community uses collaboration and governance as tools to achieve benefits across the community.  Case studies are provided to illustrate the process and the outcomes achieved.

This entry was first published on November 1, 2019. This topic is also cross-listed to the Data Capture Knowledge Area.

This Topic is also available in the following editions:

Business processes, whether in the public or private sector, typically involve multiple organizational sectors and units. In the public sector, for example, public safety often involves police, fire and ambulance services working together, and may require multiple fire departments from more than one city to respond to a single emergency. If the emergency is more extensive, state and even national responders must work together. In the private sector, the delivery of services to a client may involve multiple parts of the company located in different parts of the country working together in a coordinated manner. GIS is uniquely suited to these types of endeavors because geography is a key element of the technology. But a coordinated response is not a function of technology. If GIS is to be of use, the people involved in the process must coordinate their efforts to solve problems using the technology.

While data stewardship may have defined boundaries, how those data are and can be used does not. One of the most challenging aspects of working together across the geospatial community is the coordination that must be done across jurisdictions and levels of government, or within and across the corporate organization to ensure data compatibility, quality, and access. Experience shows this is best done through governance structures geared toward either the regional or state scale in government, or the corporate-wide scale in business, with the key concept being collaboration to solve common problems. A governance structure is a formal recognition of decision rights – who makes which decisions, how those decisions are made, what triggers the necessity for a decision, who sits at the table, who has a say, etc.  To achieve the use of a GIS successfully across multiple organizations, it is essential to have a collaborative governance structure.

Collaborative governance provides a structure within which partners can make decisions together. Collaboration is necessary when the partners have no authority over one another and do not fall under the purview of the same governing body.  In other words, no single entity is in charge of their activities, and yet they need to work together to solve a problem or improve a process because it is in their shared interest to do so. When it comes to challenges typical in the GIS community (such as various data formats, schemas, maintenance schedules, access constraints, accuracy, etc.), collaborative governance has proven to be an effective approach to get critical partners around the table to develop solutions to common problems. The shared development of common standards for data exchange serves as a good example of the effective use of a collaborative governance structure.

Despite the progress made in the GIS profession over the last 30 years, the geospatial community continues to struggle with a problem common to organizations worldwide: inability or unwillingness to share data with partners.  Instead of sharing data, organizations often duplicate the processes of data development, update, and storage at great cost. The return on investment (ROI) from implementing a collaborative GIS supporting multiple stakeholders is estimated to be as high as 10:1 (Zerbe et al. 2012). This investment return is realized through savings from reduced dependency by many users on multiple datasets. Users are instead pointed to data that are built once by authoritative sources and used many times.

Collaborative governance sparks the conversations that make it possible to discover common problems and shared solutions. Common technical and analytical questions or needs arise out of conversations about current projects. Individual stakeholders will get behind an effort if it is in their interest to do so. The goal of collaborative governance is to define the benefits to each stakeholder through discussion and development of achievable solutions. While such governance issues exist at the local, state, regional and national level, and in the corporate sector, the three case studies provided will focus on the state and national levels of collaborative governance.

The first case study describes how the State of Oregon used collaborative governance to create a framework within which shared issues can be overcome. The Oregon Geographic Information Council (OGIC) commissioned a study 12 years ago and found that the Oregon state and local government spent $5 billion annually on geospatial data development, management, and use (State of Oregon Information Resources Management Division Geospatial Enterprise Office 2016). It also showed that they wasted $200 million annually on those activities, in roughly equal proportions.  Approximately 80% of the expense and waste was related to personnel costs for duplicated data development and update.

To combat these seemingly intractable data sharing issues, Oregon decided statutory authorization was needed for OGIC and its mission, as well as a mandate for public bodies to share at least the base, or reference, geospatial data (also known as framework data).  Prior to this effort, the authorization for OGIC was a Governor’s Executive Order which only provided authority over executive branch state agencies.  The new legislation, enacted in 2017, re-established OGIC as a collaborative governance body representing all geospatial data users (Oregon Legislative Assembly 2017).

The new law mandates that all public bodies in Oregon share geospatial framework data securely with each other.  The State CIO’s Geospatial Enterprise Office is setting up a secure data hub for that purpose. This approach has created a new, equitable partnership between all public bodies and a collaborative governance structure to make decisions about how that partnership will be managed. The new OGIC collaboration will result in significant savings and more consistent government services across the state.

The second case study comes from the state of Minnesota and the Minnesota Geospatial Information Office. Efforts related to Next Generation 9-1-1 (NG9-1-1) serve as an excellent example of where collaborative governance is required for successful deployment and sustainability.  Geospatial data and processes serve as a key component of routing calls to the correct Public Service Answering Point (PSAP).  Minnesota has taken on a statewide approach to preparing for NG9-1-1 built on the foundation of collaborative governance.  The effort is led by the Department of Public Safety (DPS) and is governed by the State Emergency Communications Board (SECB). It includes partnerships with every PSAP and tribal nation in the state to create or obtain the geospatial data necessary to support the deployment of NG9-1-1, while a partnership with the Minnesota Geospatial Information Office (MnGeo) creates the ability to validate, standardize, and aggregate the data into the statewide geospatial data layers needed to correctly route calls for emergency services based on GIS.

To further support the governance process needed for NG9-1-1 deployment, two new committees (NG9-1-1 GIS Standards Committee, and GIS Subcommittee) were formed under the SECB to support the development of GIS standards, processes and data elements needed in order to standardize the deliverables and support sustainability.

MnGeo and DPS partnered together to engage each PSAP to understand the maturity and status of where each was with needed geospatial data, tools, and resources. Additionally, MnGeo provided a secure portal for PSAPs to submit data for validation, standardization, and aggregation. The portal also serves as the place the entire 9-1-1 community can come together to get access to standards, validation reports and scripts, and standardized aggregated data for the entire state that can be downloaded into their local Computer Aided Dispatch (CAD) system.  Standardized data serves not only as a key resource for routing calls but also for sharing data with neighboring jurisdictions to facilitate rolling their calls to partner PSAPs in times of high volume or failover.

None of this would have been possible without strong communication and collaboration and a willingness to partner together in building out collaborative governance needed to support standards, data, processes, and tools that will now support the overall sustainability of NG9-1-1 in the state.

The third, and final case study comes from the National States Geographic Information Council (NSGIC), a national organization that advocates for the efficient and effective use of geospatial data and technology in government. This group is driven by geospatial leaders from each state and territory, with a national scope but a primary perspective at the state government level.

In 2005 and 2006, at least a dozen NSGIC members, along with many other stakeholders, participated by invitation in the Future Directions strategic planning initiative sponsored by the Federal Geographic Data Committee (FGDC). Several teams were established, each working on different aspects of the National Spatial Data Infrastructure (NSDI) to recommend specific improvements. 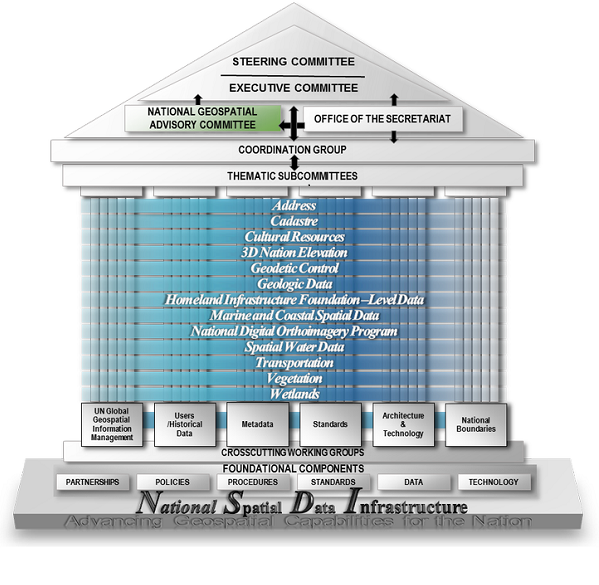 NSGIC members played key roles in the various teams. The Governance Team was a particular focus for the NSGIC participants. That team made three recommendations with far-reaching impacts on the NSDI:

The second recommendation called for the establishment of a National Geospatial Coordination Council, with membership from all stakeholder sectors. The National Geospatial Advisory Committee (NGAC) was created by FGDC in 2008 as a direct result of that recommendation, and it remains an effective voice for the non-Federal stakeholder community. NGAC has produced a large volume of advisory documents that have greatly influenced the work of the FGDC and the direction of the NSDI.

The establishment of the Coalition of Geospatial Organizations (COGO) in 2008, as an outgrowth of the Stakeholder Group initiated several years earlier by NSGIC, was also partly in response to that second recommendation. NSGIC worked closely with URISA, and in coordination with a number of other stakeholder associations, to create a coalition of stakeholders that has influenced the ongoing development of the NSDI. The most significant influence by COGO has come from the development of a Report Card on the NSDI in 2015 (Bossler et al. 2015) followed by a second edition in 2018 (Freundschuh, Sinton, and Smith 2018). As another outgrowth of the Future Directions work on governance, and partly in response to the 2015 COGO Report Card, many geospatial professional organizations worked closely with each other and Congress to enact the Geospatial Data Act of 2018.  The effort to enact a law that provides statutory authorization for the FGDC, and directs federal agencies to partner with state, local, and tribal governments, higher education and the private sector to develop the NSDI, was an enormous collaborative success by the geospatial community that will have immeasurable and lasting effects.