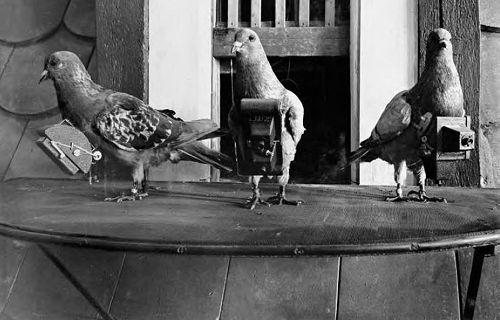 In 1903, Julius Neubranner, a photography enthusiast, designed and patented a breast-mounted aerial camera for carrier pigeons. Weighing only 70 grams, the camera took automatic exposures at 30-second intervals along the flight line flown by the bird. Although faster than balloons, they were not always reliable in following their flight paths. Today the pigeon corps has been replaced by unmanned aerial vehicles, but aerial photography continues to be an important source of data for use in a wide range of geospatial applications. Processing of the imagery to remove various types of distortion is a necessary step before the images can be georeferenced and used for mapping purposes.

Airphoto interpretation is the science and art of identifying, measuring and analyzing geographic features on the Earth’s surface from aerial photographs and relating these features to other items and activities occurring on the Earth.

Orthorectification is the process of removing geometric distortions from images. Images have tilt and relief distortions that make it difficult to compare accurately a map and an image of the same geographic area. Once an image is orthorectified, features on the image are shown in their planimetric locations.

Georeferencing is the process of assigning coordinate values to each pixel of the raster based image such as an aerial photograph that has been digitized on an image scanner or taken by a digital camera. 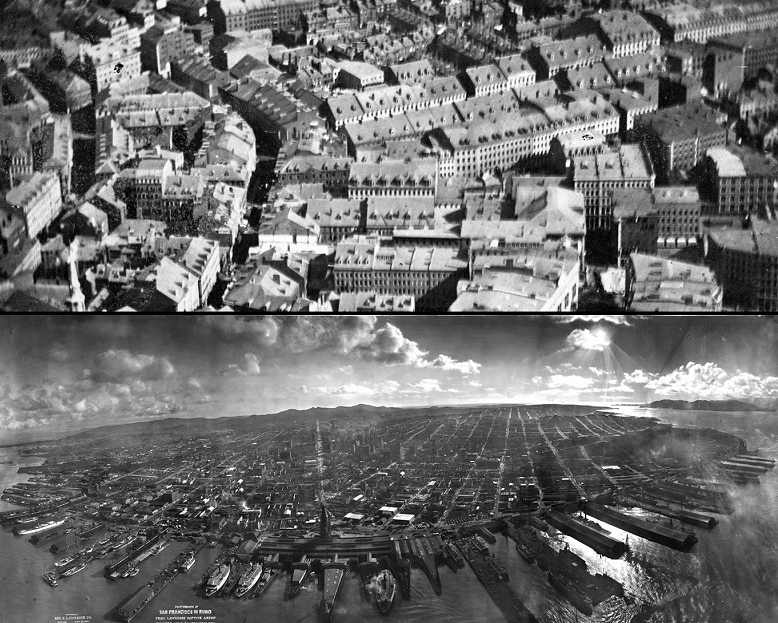 Near the end of World War I, Sherman Mills Fairchild, a restless inventor with personal wealth to develop his ideas, created an improved aerial camera that remained the standard into the 1950s. The camera featured a shutter inside the lens, thereby reducing significantly image distortion caused by slow shutter speeds that could not keep up with the movement of a plane. Fairchild also noticed that trying to obtain vertical photographs by holding a camera over the side of a plane and manually advancing the film was not a workable method for taking aerial photographs in a regular and systematic manner (Figure 2). In 1924 he founded the Fairchild Aviation Corporation and produced the first U.S. aircraft to include a fully enclosed cockpit and cabin (Doyle, 1080). With an enclosed plane he mounted his camera system inside the cabin with the lens positioned to view through an opening in the cabin floor. This improvement allowed for better vertical photographs to be taken relative to the movement of the aircraft. He included with his system an intervalometer, a device that activated the camera at a time interval based on the speed of the plane. These changes allowed a series of vertical aerial photographs to be obtained systematically along an established flight line. Fairchild as well as others provided the beginning of a new stage in airphoto interpretation, a stage called photogrammetry. In 1934, twelve people met in Washington, D.C. and from this meeting The American Society of Photogrammetry was founded (Reading, 1952). Later the name was changed to the American Society of Photogrammetry and Remote Sensing (ASPRS). Today it goes by the name ASPRS: The Imaging and Geospatial Information Society. 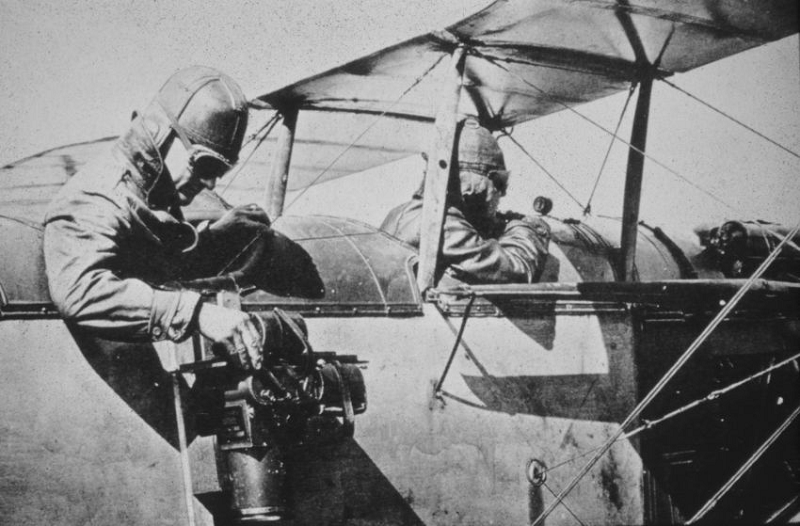 Figure 2. Reconnaissance aircraft used during World War I, with the pilot trying to maintain a level plane so that the photographer could take vertical photographs circa 1919. Source: United States Air Force.

In mid-March 1936, two successive, extraordinarily heavy rainstorms battered the East Coast from Virginia to Maine (Grover, 1937). These storms overwhelmed rivers and melted large snow accumulations, creating a major flood in the Susquehanna River Basin, known as the “St. Patrick’s Day Flood.” This was the largest recorded flood in the Basin up to that point in time. The flood’s significance extended beyond its high waters as it became the impetus for the Federal Government to pass important legislation for extensive flood-related projects as part of the Great Depression Era’s policy making.This spurred the U.S. Department of Agriculture’s Soil Conservation Service to start inventorying land cover in the country’s major river basins by using the relatively new technology, for the time, of aerial photography. These land cover inventories, most of which were done in the 1930s, represent the Country’s first major land-environmental data base. The Soil Conversation Service continues, even to this day, the process of using aerial photography to examine land cover conditions, especially with respect to producing their county soil surveys. As part of this data base, flight dates and location code numbers were placed on the photographs. This information, something previously not provided, made it easier to analyze the photographs.

A vertical photograph has a geometric distortion known as position displacement. Features directly below the center of the camera lens will have only their tops visible, while all other features will appear to lean away from the center showing portions of their tops and sides. The farther away from the center the more the distortion will occur, resulting in positional errors. Also taller features will produce greater distortion than smaller features adding to the error. To partially address this error issue vertical photos taken along a flight line generally have a forward overlap of 60% to 70%. In other words, the current photo captures a large portion of the previous photo in the flight line. In addition to forward overlap, sidelap occurs between adjacent flight lines. The amount of sidelap varies between 25% and 40%. The overlapping process reduces the chance of missing ground areas. Also, it produces stereopairs of airphotos, which permit interpreters to view ground features in 3D with the use of a stereoscope.

However, the greatest use of overlapping photos is to create a mosaic of the area being inventoried Most aerial photography is taken to produce mosaics of areas larger than a single photo can cover. Before the digital era a mosaic was developed by tacking adjacent photos on a wall and interlacing the lapped areas on the photos (Figure 3). It was necessary to align the same features, known as control points, on each photograph, a tedious task that involves as much art as science. Today, non-digital photos are scanned and their grey or color tones are numerically recorded based on the data points per inch. Software exists to seam together these photos to form a mosaic. 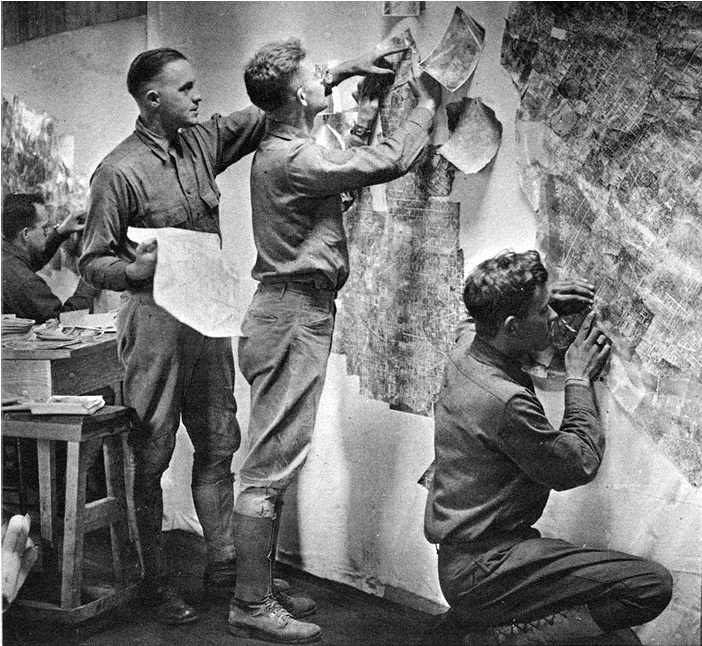 Incorporated into the frame of cameras designed for aerial photography are fiducial marks. These marks appear at either the four corners or the mid points of the four sides of the photograph. They are used to determine the center of the photograph, known as the principal point (PP). This point on the photo identifies the location of nadir on the ground. Nadir is the plumb point, the vertical line between the center of the camera lens and the center of the Earth. Trying to determine nadir on the ground for each photo is not easy; thus, it is generally assumed that the principal point and nadir are at the same location on a vertical photo.

A vertical airphoto can be orthorectified, a process that removes most of the position displacement. Initially this process used an orthophotoscope built in 1955 by Russel Bean of the United States Geological Survey (USGS) (Radinski, 1985). The orthophotoscope passed light over the photo’s original film and changed the location of features on the photo onto a new emulsion. The new film was used to create an orthophoto or orthoimage. The scale on an orthophoto was uniform, making it possible to measure true distances across the photo and forming an accurate representation of the area photographed (Figure 4).

Topographic relief, lens distortion, and camera tilt were rectified making it easier to create mosaics but the process was analog in nature, time consuming, and costly. In the early 1980s, computer algorithms were developed to produce orthophotos faster and easier than using the analog method. Today a digital image that has the properties of an orthographic projection is referred to as a Digital Orthophoto Quadrangle (DOQ). The DOQ combines the image characteristics of the original photograph with the georeferenced qualities of a map, which allows distance, area, and angle measurements to be ascertained. The USGS coined the acronym DOQ in making both its 7.5- x 7.5-minute quadrangle maps and 3.75- x 3.75-minute quarter-quadrangle maps. The acronym DOQQ is used for quarter-quadrangle orthophotos when it is necessary to distinguish the quarter-quadrangle from the quadrangle DOQ. 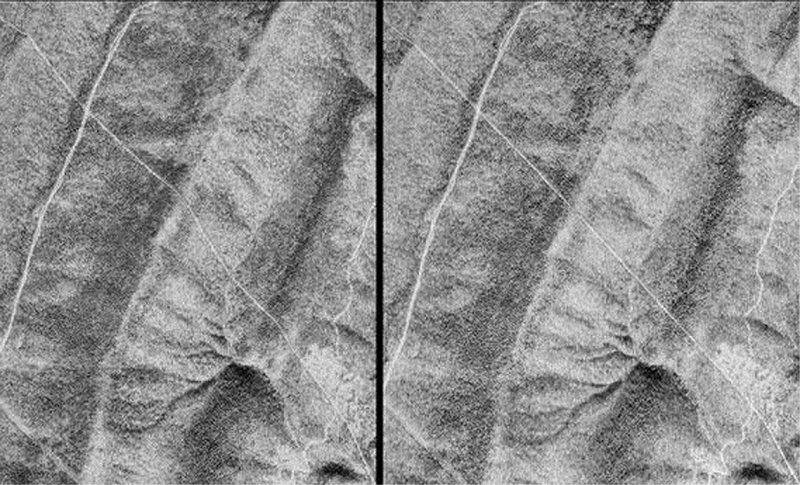 Figure 4. A pipeline extending southeast to northwest across the aerial photograph (left) appears to have curves as the result of terrain variation. In the digital orthophoto (right) the pipeline is seen in its true state as a straight line. Source: United States Geological Survey.

Digital aerial photographs, either taken from a digital camera or scanned from a printed photo, are raster images. A raster image has a grid-based file where every grid cell or pixel (picture element) has a numerical value. Some raster files have georeferencing information embedded in a header record; others have a secondary metadata file. The georeferencing process allows orthorectified aerial photos to be placed accurately - within a mapping platform - on the digital surface of the earth over the area where the photo has captured.  In this way, orthophotomosaics are frequently used as background images. Superimposed on these images might be vector-based attribute information such as the location of school buildings, roads, and parks. A vector-based file contains not only attribute data but also coordinate values used to map the attribute information. The challenge is to georeference a raster image with vector-based attribute data. The georeferencing information associated with a raster image file not only includes coordinate values but also the size of the grid cells or pixels (picture elements) related to the image when it was taken.  If the photo or image raster-based file has been orthorectified, the size of the grid cells should be the same. With this information the coordinate values of each individual grid cell can be calculated, and thereby, linked to the coordinates of the attributes in the vector-based file.

Another method used in georeferencing is rubber stretched rectification. This process tries to stretch an image across a map surface using reliable control points. However, the stretching process can produce variable accuracy errors due to elevation differences and the lack of good control points throughout the study area. An image that has been orthorectified or rubber stretched is georeferenced but overall accuracy varies.

Once an orthophoto has been georeferenced, using GIS software one can digitize and derive new vector layers from the information visible in the photo. The digitized values are the coordinates for the attribute data being entered into the vector-based file. At this point a raster image such as an orthophoto and vector-based attribute are merged. Figure 5 is a raster based satellite image, orthorectified, showing a small section of the Spring Creek forest fire that occurred in Southern Colorado during 2018. Superimposed on the image, as a separate GIS vector layer, are the locations of homes destroyed during the fire. Homes are displayed as yellow circles; green vegetation areas appear in different levels of red; and burned forested and semi-forested areas show as various shades of blue. Using airphoto interpretation methods the remotely sensed image in conjunction with the location of the yellow circles can help researchers to understand the dynamics of the fire. 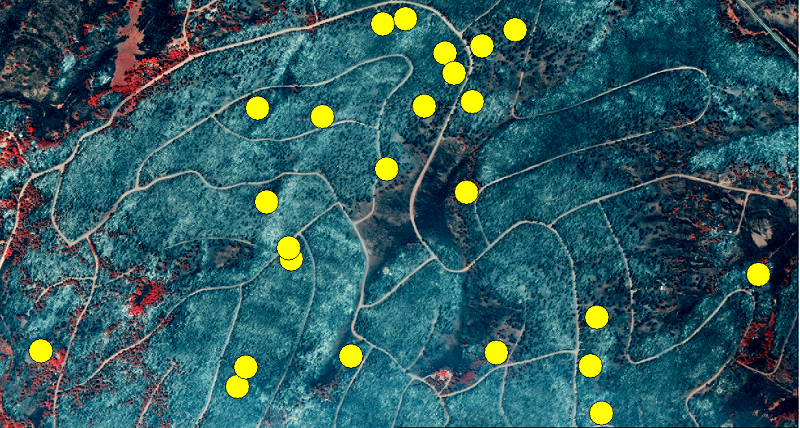 Figure 5. A section of the 2018 Spring Creek forest fire in Southern, Colorado and the location of destroyed homes, indicated as yellow points. Source: author.

Krule J. (2014).The Origins of Aerial Photography. The New Yorker https://www.newyorker.com/culture/photo-booth/origins-aerial-photography. Retrieved 10 May 2019. 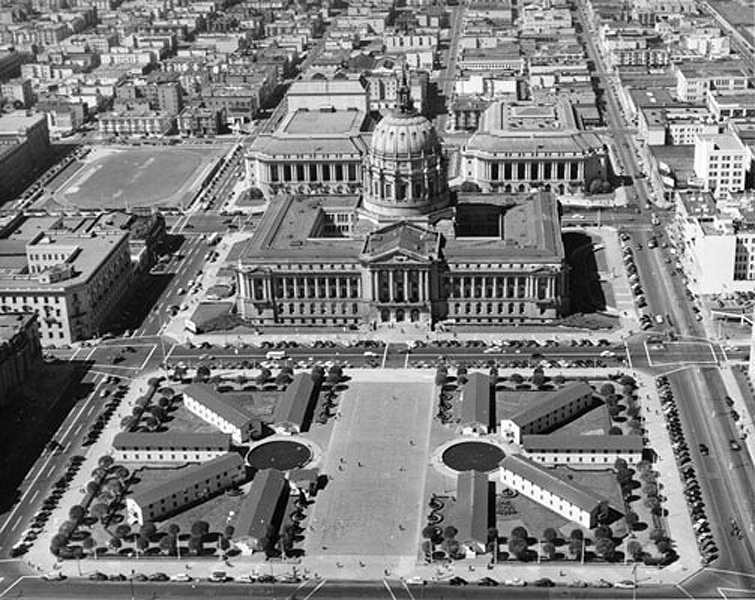