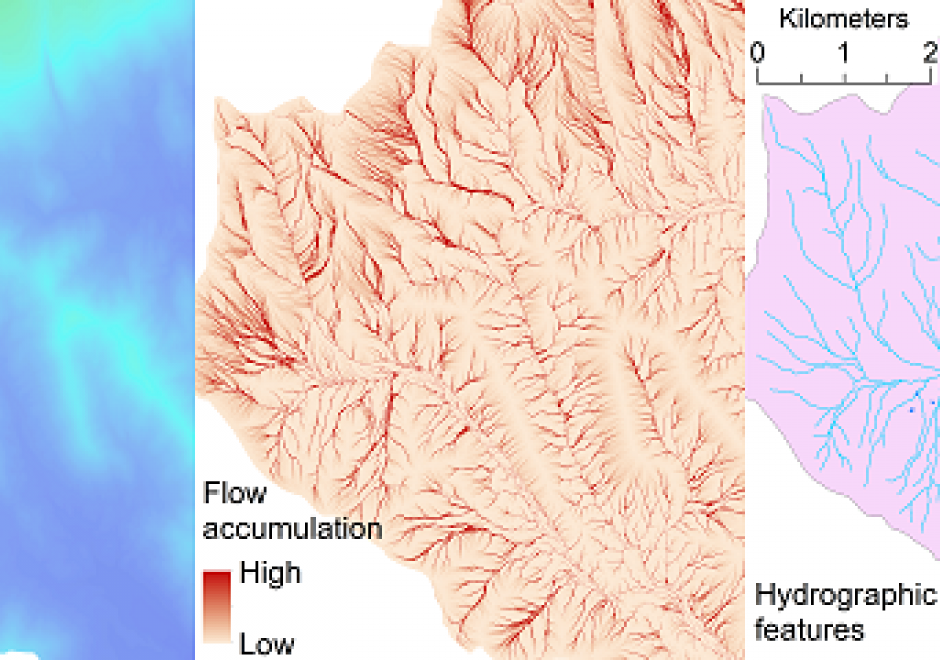 This topic is an overview of basic concepts about how the distribution of water on the Earth, with specific regard to watersheds, stream and river networks, and waterbodies are represented by geographic data. The flowing and non-flowing bodies of water on the earth’s surface vary in extent largely due to seasonal and annual changes in climate and precipitation. Consequently, modeling the detailed representation of surface water using geographic information is important. The area of land that collects surface runoff and other flowing water and drains to a common outlet location defines a watershed. Terrain and surface features can be naturally divided into watersheds of various sizes. Drainage networks are important data structures for modeling the distribution and movement of surface water over the terrain.  Numerous tools and methods exist to extract drainage networks and watersheds from digital elevation models (DEMs). The cartographic representations of surface water are referred to as hydrographic features and consist of a snapshot at a specific time. Hydrographic features can be assigned general feature types, such as lake, pond, river, and ocean. Hydrographic features can be stored, maintained, and distributed for use through vector geospatial databases, such as the National Hydrography Dataset (NHD) for the United States. 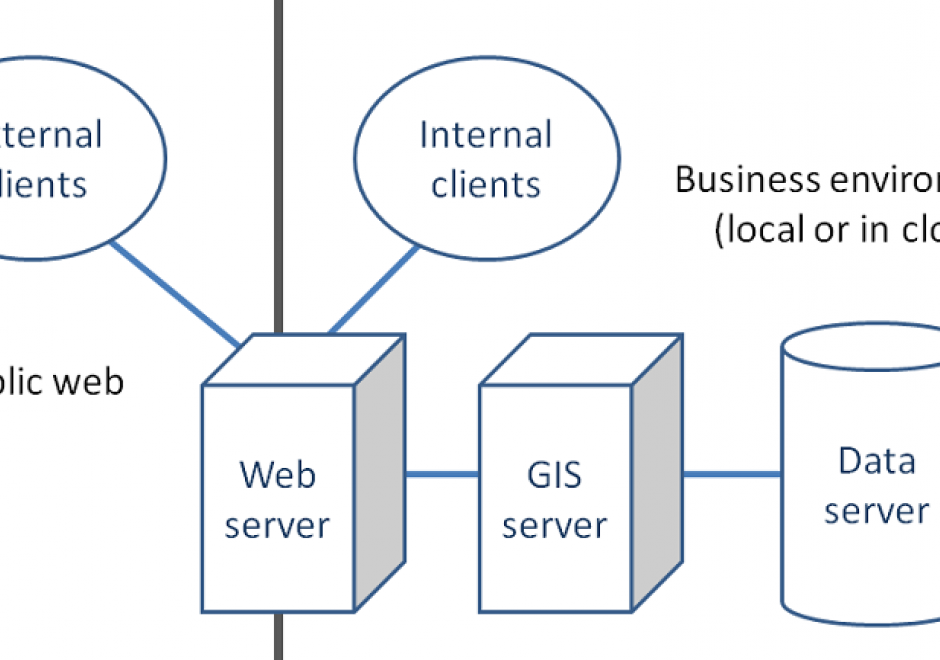 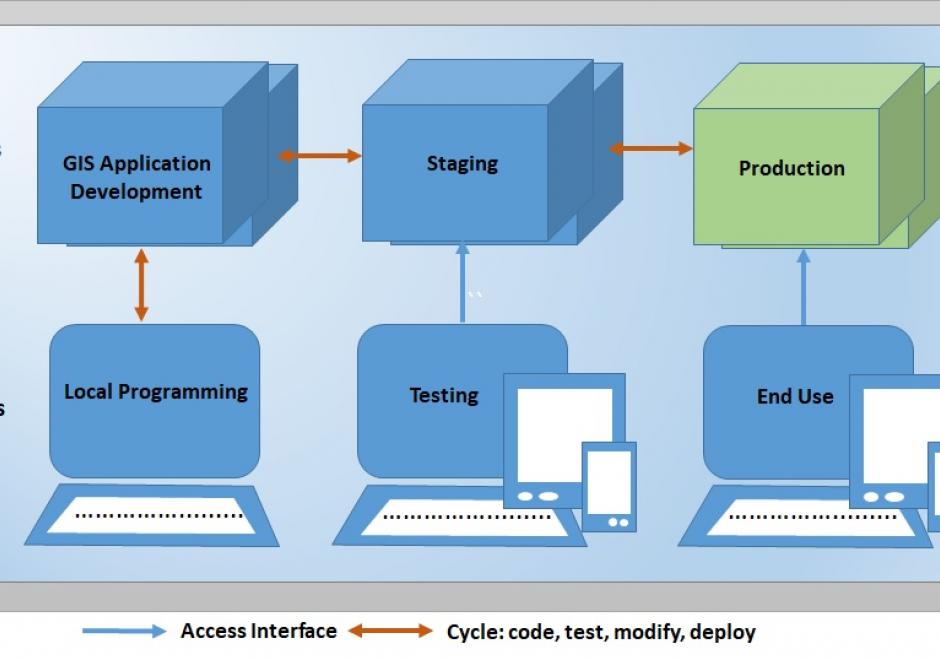 Web GIS programming involves creating, extending, utilizing, Web GIS or web mapping solutions to solve specific problems, build complete applications, or consume or produce data and geospatial processing services. With the expansion of the internet and availability of Web GIS or Web mapping options, web GIS programming is becoming a commonly required skill set in many organizations. Web GIS programming is a type of software development that provides a means of handling internet, browser-based software application development tasks which require unique solutions to web GIS or web mapping problems. In addition, a number of Web GIS software options offer application programming interfaces (APIs) that provide a means by which developers can leverage the published data and processing services of others to build and customize applications through standardized interfaces with external web GIS software, data, and services. Web GIS programming applies to mobile as well as desktop application development. A browser typically runs software applications by submitting Hypertext Transfer Protocol (HTTP) or Hypertext Transfer Protocol Secure (HTTPS) requests to a server hosting resources the application user wishes to access available through a Uniform Resource Locator (URL), and the server replies by providing resources or performing functions requested by the user. This entry reviews the fundamentals of web GIS programming, accompanying the Web Mapping and other entries in the Programming and Development section, the Web GIS entry in the Computing Platforms section, and the User Interface and User Experience (UI/UX) Design entry in the Cartography and Visualization section (Sack, 2017; Quinn, 2018; Roth, 2017). 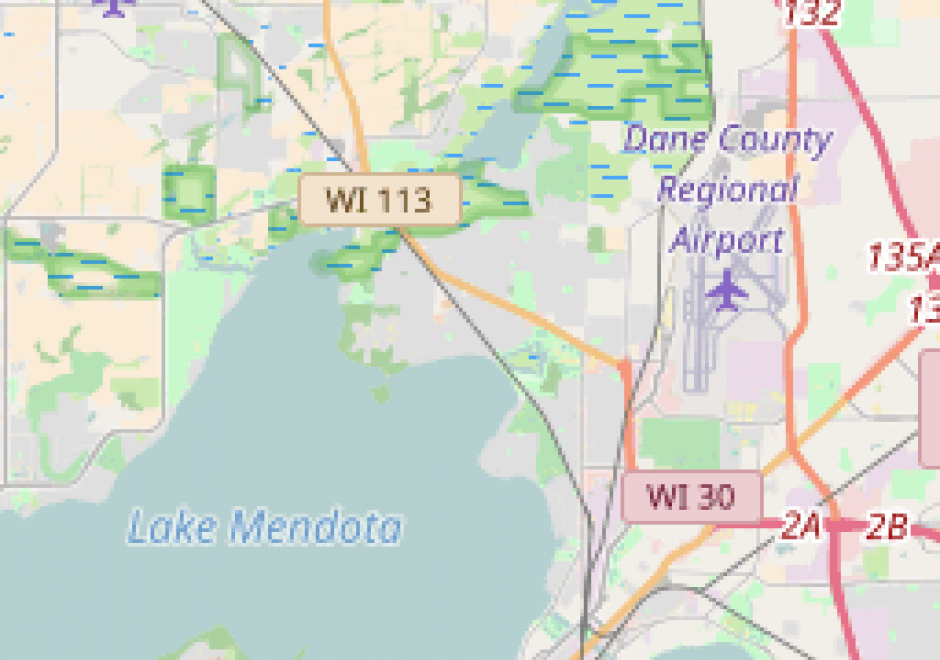